Technical issues, unnecessary scenes mar what could have been a decent film 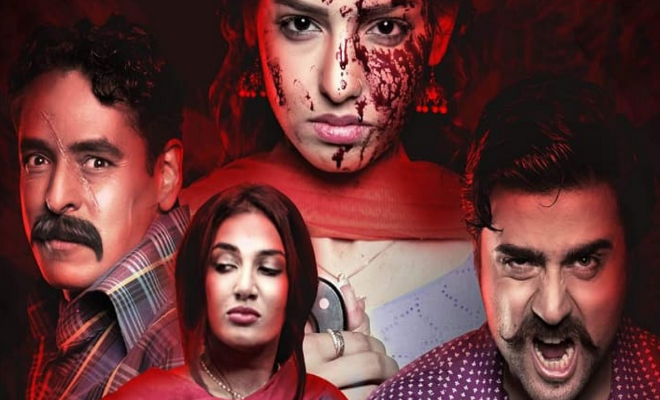 The Netflix automated brain was trying to locate sub titles. Can’t I rewind it like the good old cassette days? The hand twitches to scroll the timeline back to the missed line like its VLC. But then in an instant, you realize that this is a cinema. You look to your right and left. People as confused as you are. Ah, well at least we are all in this together. The whys, and especially the hows of it, dumbfound you. A large part of Tevar is spent trying to 2nd guess what the actors are trying to say. The background music/score is so loud, dialogues are inaudible. Rest of the time, you are trying to figure the causality of their actions.

Bollywood was there a year or so ago, with almost half a dozen rape-revenge stories. Now, with Tevar, Pakistan has its 2nd such film of recent times, counting Verna as the 1st. Set in late 80s Karachi, we see events of a particular day. Arfa (Sukaynah Khan), lives with her younger sister (Hina) and ailing father in Karachi. A cousin from Hyderabad has arrived to win affections of Arfa. In the morning, father leaves to visit the the bank, and Hina goes to her university. Shafqat and Arfa are home alone.

Shafqat played Taqi Ahmed, has a shairana mizaj and somehow in love with Arfa. But, she is set in her ways. She has an ideal soul mate, and Shafqat doesn’t fit the bill. Shafqat, however is a trier. Some may call him stubborn but he sees it as a ‘mustakel mijazi’. He refuses to yield, despite repeated insults. They continue their malarkey. The ice is beginning to break, between the two. An uneasy romance, a cousin-romance is imminent.

And we also meet Dawood and his gang, with typical gangster names (Ustad, Tony, Baghi, & Mauji). These are petty criminals, who have a special relationship with the police. Talking of relationships, Dawood is in one with Mathira. However, what is most peculiar is the gang’s behavior with each other. They say random lines (some we hear, many we guess) and start high fives, with loud awkward laughter. A bunch of random, pointless scenes transpire.

On that day, riots break out in Karachi. A sexual assault, which has been cut out presumably due to censor board instruction, (one shot is in the trailer but not in the film), follows a dacoity by the gang. Dawood and gang, are now in the same house of the girl they raped (Hina). What follows is lot of buffoonery from the gang, gore, blood and killings.

Unlike Kataska, Tevar has a theme that it is following. Its Shafqat’s journey to prove his love. It’s about Arfa’s emotional strength. However, even if you ignore the technical glitches, the whole sequence of gang’s entry in the house to the climax seems extremely dragged. Are they in the house to find money or gold etc.? Supposedly yes, but they spent a hell lot of time just being roaming around, harassing Arfa. They demand that fresh food is prepared for them as they just loiter around the house. It’s confusing.

As for the performances, Sukaynah Khan delivers with her emotive portrayal of Arfa. In the 1st half of the film, she is coy, but when the script demands she turns all kinds of crazy. Taqi Ahmed, does as well as he could be given the script. Akbar Subhani as the father becomes a joke, due to the continuously repeating the same dialogue ‘meri beti’. While, the villains do much better. They definitely had more room to be macabre and they don’t let that opportunity.

Overall, it was a strong idea to begin with. Rape-revenge films are follow a usual template. This one doesn’t. We see events of a day primarily, mostly shot in one house. Yet the film feels disjointed. Technical issues, unnecessary scenes mar what could have been a decent film.