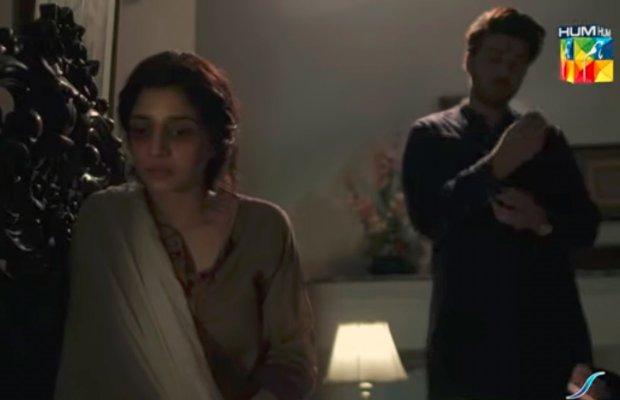 It is not the first time that Pakistani drama makers have brought a ‘mazloom aurat’ portal in a prime-time drama slot.

However, the recent episodes of Qissa Meherbano Ka left viewers disgusted and triggered by the scene that definitely could have used a content warning.

The drama became the talk of the town for showing a scene where (Ahsan Khan) Murad the husband forces himself on his wife Meherbano (Mawra Hocane).

The unnerving scenes from the Episode 15 of HUM TV drama grabbed everyone’s attention for a display of marital rape, and for many, it became too much to handle for the viewers.

While in Episode 16 that aired on December 18, Meherbano justified the rape and said it was Murad’s “right” to be with her as he pleased.

The opinion of drama fans seems to be divided for highlighting the marital rape issue in a prime-time drama.

For some, it was part of a progressive story, while many were left visibly irked with too much toxicity in the storyline.

I just could not watch it when he caught her from her hair … it was plain inhumane. 🤮

In today’s episode murad rapes his pregnant wife. The way that scene was shot was scary but now no one can call murad the hero

It’s #MawraHocane’s performance that shines in #QissaMeherbanoKa as Murad becomes aggressive. & while Mawra’s performance is heart wrenching, difficult to sympathize completely when Mehru has ALWAYS had an out & her reasons for staying in this house are feeble. #PakistaniDramas pic.twitter.com/6Eg3Ex8TBk

I guess this is Mawras take on it! Im sorry but it gets very tiring for the audience prolonging such toxicity, we also got fed up in HKKST, this is not a film. You cant show misery constantly, yes people suffer in reality, we dont need to see 20 epis of it #QissaMeherBanoka https://t.co/C5isy53IB1

The criticism also invited the lead actor of the drama Mawra Hocane to share her stance on social media.

Hocane responded to the criticism on the scene with a textbook definition of marital rape.

“Marital rape is defined as the forceful act of consummation by the husband with his wife without her explicit approval,” she tweeted.

“Marital rape is defined as the forceful act of consummation by the husband with his wife without her explicit approval.”#QissaMeherBanoka https://t.co/AVYzLWsb2P

What is your take on this drama? Do let us know in the comments section below.