Buckle up for some 3D adventure and fun. 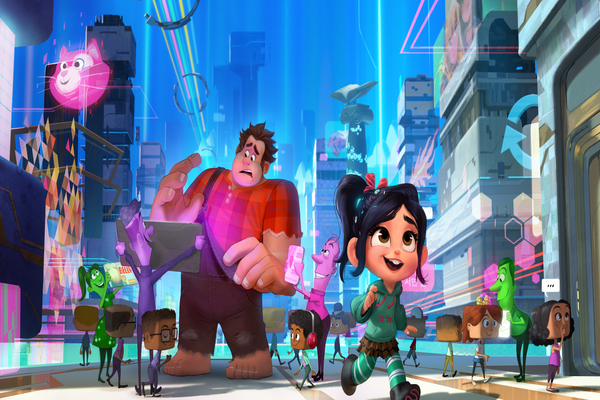 “Ralph Breaks the Internet: Wreck-It Ralph 2” leaves Litwak’s video arcade behind, venturing into the uncharted, expansive and thrilling world of the internet—which may or may not survive Ralph’s wrecking. Video game bad guy Ralph (voice of John C. Reilly) and fellow misfit Vanellope von Schweetz (voice of Sarah Silverman) must risk it all by traveling to the world wide web in search of a replacement part to save Vanellope’s video game, Sugar Rush. In way over their heads, Ralph and Vanellope rely on the citizens of the internet—the netizens—to help navigate their way, including a webite entrepreneur named Yesss (voice of Taraji P. Henson), who is the head algorithm and the heart and soul of trend-making site “BuzzzTube.” Directed by Rich Moore (“Zootopia,” “Wreck-It Ralph”) and Phil Johnston (co-writer “Wreck-It Ralph,” “Cedar Rapids,” co-writer “Zootopia,”), and produced by Clark Spencer (“Zootopia,” “Wreck-It Ralph,” “Bolt”), “Ralph Breaks the Internet: Wreck-Ralph 2” hits theaters on Nov. 21, 2018.
0Share
228Views

Ralph and Vanellope are coming back to the screens with a new funny adventure. The film will be releasing next month on 21st November, says the official announcement by the Disney Studios.

Ralph Breaks the Internet: Wreck-It Ralph 2, trailer gives the look at their new adventure, which takes them from the arcade to the vast world of the Internet! Ralph seems to be pretty impressed with what the internet has to offer and he’s having a great time in this new world that he’s entered.

John C. Reilly and Sarah Silverman reprise their roles and as Ralph and Vanellope, and you can see what kind of trouble they will get while being inside the Internet. There are come speculations that few memes are also being included in the film.

tweet
Share on FacebookShare on TwitterShare on PinterestShare on Reddit
Saman SiddiquiOctober 22, 2018
the authorSaman Siddiqui
Saman Siddiqui, A freelance journalist with a Master’s Degree in Mass Communication and MS in Peace and Conflict Studies. Associated with the media industry since 2006. Experience in various capacities including Program Host, Researcher, News Producer, Documentary Making, Voice Over, Content Writing Copy Editing, and Blogging, and currently associated with OyeYeah since 2018, working as an Editor.
All posts bySaman Siddiqui