In case you haven’t watched it, here are few reasons to include it to your watch-list. 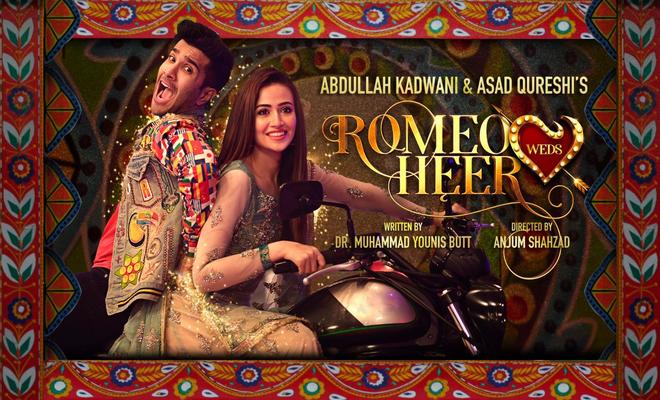 Although Romeo Weds Heer has come to an end, it had always been an instant favourite since the first episode. While most of the dramas highlight serious, but important issues, the viewers needed entertainment and light-hearted shows to watch in order to lift their mood. At such a time, Romeo Weds Heer felt like a breath of fresh air.

Directed by Anjum Shahzad and written by the famous Muhammad Younas Butt, Romeo Weds Heer is based on an unconventional love story and family drama. On top of that, the stellar cast includes Feroze Khan, Sana Javed, Ali Shafaat, Firdous Jamal, Ali Safina and Saman Ansari. In case you haven’t watched it, here are 5 reasons to include it to your watch-list.

1. Feroze Khan and Sana Javed create magic on-screen:
Before Romeo Weds Heer, the talented actors, Feroze Khan and Sana Javed, became the most talked-about on-screen pair after their incredible performances in Khaani. To the joy of their fans, they have proved that no matter what the genre of their character is, they have the ability to ace it. Their extraordinary chemistry and spectacular portrayal of Romeo and Heer is reason enough to binge-watch this drama.

2. Romeo Weds Heer is a comedic genius:
It is no secret that Muhammad Younas Butt has written some of the best comedy dramas and shows in the past. However, Romeo Weds Heer may just be the most successfully hilarious drama he has written so far. The dialogues and situations easily enable the viewers to double over with laughter. The best part is that the comedy is quite clean and family oriented.

3. Ali Shafaat as Nazar Bhai:
Although Ali Shafaat started his career with the famous 4 Man Show, he gained popularity after he started impersonating famous politicians and celebrities. After that, he became an overnight sensation. His portrayal of the greedy and demanding son-in-law, Nazar, in the drama is not only a perfect depiction of such people but is quite relatable. The dialogue delivery, facial expressions, and body language enhance his performance as Nazar. Ali Shafaat has become one of the best comedy actors of recent times and Nazar is an exceptional example of it.

4. A variety of characters played by incredible actors:
Not only Nazar, but every character of Romeo Weds Heer has also made their mark throughout the drama. From Aflatoon to Elephant, from Dr. Shahnaz to Jaidi, all of them have an important role to play in the story of Romeo and Heer. Every time they appear on our screens, their comedic timing is enough to make you burst out laughing. The credit goes to the amazing actors playing these characters.

5. One of a kind love story:
Although Romeo Weds Heer is a love story, it is not your average unicorn and rainbows love story where the hero saves the heroine, and they live happily ever after. This is an unconventional and dysfunctional love story where Heer knows her worth, gets what she wants, while Romeo values her opinion and takes the back-foot when he knows Heer can handle the situation. While there is love in this story, there are issues as well. However, eventually, Romeo and Heer’s love conquers all.

The drama may have come to an end but the fans are already demanding for a second season. It will not be wrong to say that we will miss Romeo, Heer and their hysterically unusual families.

tweet
Share on FacebookShare on TwitterShare on PinterestShare on Reddit
Saman SiddiquiJune 3, 2019
the authorSaman Siddiqui
Saman Siddiqui, A freelance journalist with a Master’s Degree in Mass Communication and MS in Peace and Conflict Studies. Associated with the media industry since 2006. Experience in various capacities including Program Host, Researcher, News Producer, Documentary Making, Voice Over, Content Writing Copy Editing, and Blogging, and currently associated with OyeYeah since 2018, working as an Editor.
All posts bySaman Siddiqui