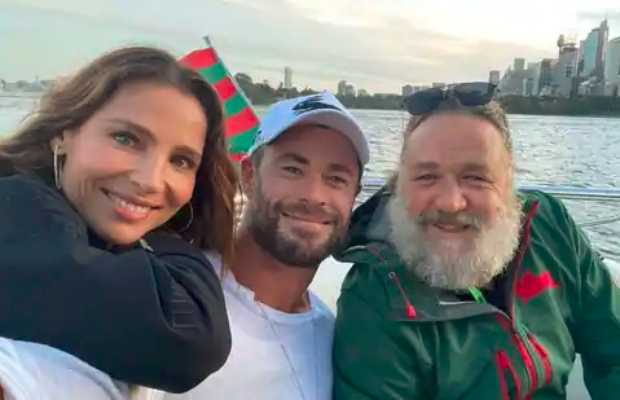 Crowe will appear in the upcoming fourth much-anticipated installment of the Thor franchise, however, his role in the film is not yet revealed.

However, a news source reveals that Crowe’s appearance is one of many surprises in the film, including the return of Matt Damon.

It was last week when the Gladiator star was spotted hanging out with the cast of the film in Australia.

Later in a social media post, Russell Crowe shared a photo with Chris Hemsworth and his wife Elsa Pataky.

Meanwhile, Elsa also shared the pictures and wrote, “Great night at the rugby with @ssfcrabbitohs #russellecrowe and good friends!”.

The film will see Chris Pratt, Sean Gunn, and Dave Bautista appearing in the ensemble cast, reprising their roles from Guardians of the Galaxy, alongside Natalie Portman, Tessa Thompson.

While Christian Bale is a new addition to the cast who is set to play the movie’s villain.

Thor: Love and Thunder is the fourth film in the Thor franchise and is being directed by Taika Waititi. He had previously directed the 2017 film Thor: Ragnarok.

Upon the work front, Crowe was most recently seen in the Solstice Studios thriller Unhinged.

And he will be soon be seen opposite Zac Efron in Peter Farrelly’s The Greatest Beer Run Ever.

It was just a day ago, Russell Crowe shared that he has lost his father, John Alexander Crowe.

The Hollywood star shared the news of his father’s demise on Twitter on Tuesday (March 30).

“I arrived back in the bush last night. Today, although the sun is shining and the torrential rain has abated, this date will forever be tinged with sadness. My dear old man, my beautiful dad, the most gentle of men, has passed away,” he tweeted.

I’m posting this because I know there are people all over the world who’s heart he touched and who’s ribs he tickled with his sparkly eyes and his cheeky attitude to everyone, and everything, and this is probably as efficient a method as any to pass on the news.