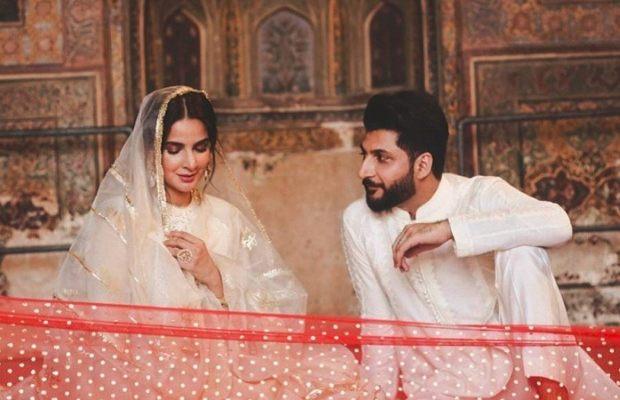 Saba Qamar and Bilal Saeed have been acquitted in the Masjid Wazir Khan case!

It may be recalled that a case was filed against the stars in August 2020, after a video clip of a song that went viral on social media alleging that they had disrespected the historic Wazir Khan Mosque in Lahore, by shooting a song at the premises.

The acquittal plea maintained that claimants registered the case against accused Bilal Saeed and Saba Qamar only to blackmail them as there was no scene of dancing recorded in the mosque paresis.

The plea maintained that they had obtained permission from the Auqaf Department for filming the video of the song ‘Qabool Hay’, adding that no witnesses complained about the shooting of the song in the mosque.

It was argued that the claimant advocate Farhat Manzoor Chandio was not a witness at the spot when the filming was rerecorded and there was no evidence to violate the sanctity of the mosque, hence, both may be acquitted from the case.

On the other hand, Advocate Farhat Manzoor Chandio, the complainant, pleaded that the culprits trampled upon the sanctity of the mosque by their act which also sparked outrage among the citizens.

An FIR was registered against the duo by Akbari Gate police under section 295 of the Pakistan Penal Code (PPC) following a court’s direction to act on an application of a lawyer as per law and decide whether a cognizable offense was made out.

As the video went viral on social media, both the artists faced severe criticism.

Social media users said that both of them had hurt the feelings of Muslims as well as desecrated the holy place so action should be taken against both of them.

Later both the stars apologized for the incident, while the endowment department suspended the mosque manager for allowing the shooting of songs in the mosque.