People claimed that the content in the drama is misinterpreting romanticism with harassment in the office. 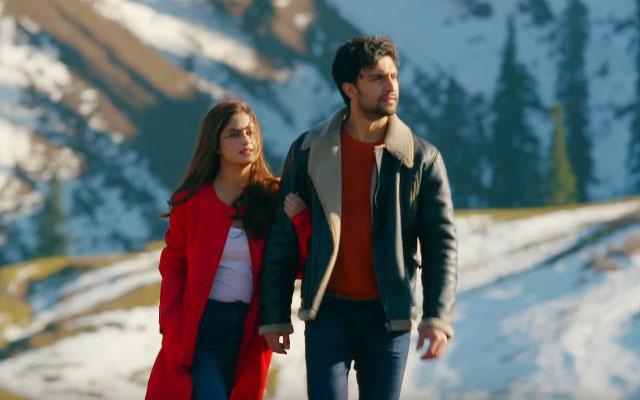 Ahad Raza Mir and Sajal Ali are back together again!

After Yaqeen Ka Safar and Aangan, the duo will be next seen in Hum TV’s upcoming drama serial “Yeh Dil Mera” as the teaser of the upcoming serial is out.

As soon as Sajal Ali shared the promo of their serial on her Twitter account, it got the attention of people who criticized it in a rigorous way and a controversy sparked against the drama on social media.

In the controversial scene, Sajal Ali goes to an interview in the office where Ahad Raza Mir, who is probably the boss, refrains from interviewing her and asks her personal questions instead. Apparently, in the scene, Sajal Ali looks a bit upset at the moment and could not respond to the interviewer.

The social media users have raised objections to the scene of the interview in the promo and claimed that the content in the drama is misinterpreting romanticism with harassment in the office.

“This is a disgusting storyline. Were you not content with weeping in every single drama serial you’ve ever starred in and showing girls their entitlement to misery? That you’re now attacking workplaces too? Extremely irresponsible, unethical and lazy productions,” a Tweeter user said.

This is a disgusting story line. Were you not content with weeping in every single drama serial you've ever starred in and showing girls their entitlement to misery? That youre now attacking workplaces too?

“What the hell? Stop romanticizing harassment. Some of us have been actually harassed by our bosses and there’s nothing cool or romantic about it. Jesus.”

What the hell? Stop romanticising harassment. Some of us have been actually harassed by our bosses and there's nothing cool or romantic about it. Jesus.

Likewise, another user said that the storyline is glorifying harassment in the office.

“The perfect case of harassment being glorified portrayed.”

The perfect case of harassment being glorifed portrayed.

A user wrote that our writers should stop portraying such kind of harassment as romance.

“No offense but if anyone conducted an interview like that in real life it would be creepy if and qualify as sexual harassment. Our TV writers need to stop framing male creepiness as romance.”

Some users have even questioned the aesthetic sense of the girl in a scene when she goes for a job interview wearing long earrings and such fancy clothes.

Who wears such clothes for an interview? Which boss asks such questions? What kind of drama is this?

One user said that if this was the case with her, she would have walked out of the interview.

If somebody dared to ask me such questions in an interview, I'd have walked out. It is so cringy.

The netizens asserted that the drama serial doesn’t meet their expectations and seemingly the script was also not up to the mark.

Responding to the allegations, the playwright Farhat Ishtiaq has said that she can ‘never portray sexual harassment romantically.’

She further said that the serial is not about a social issue but a romantic-thriller.