Sakina Samo also thinks that there should be some sort of financial reward alongside the trophy. 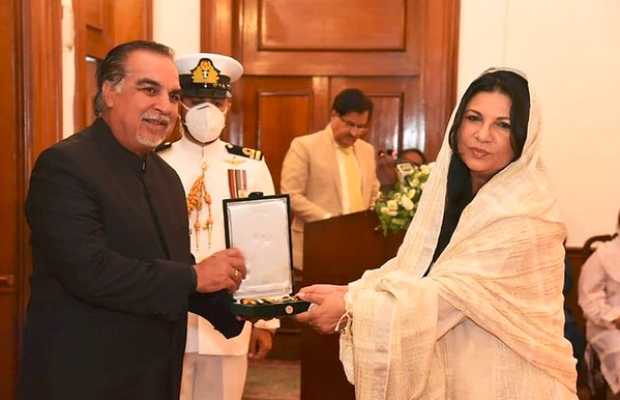 Sakina Samo, veteran actor turned director is not happy with the choice of artist for the Pride of Performance award.

Sakina who herself was conferred with the Presenditial Civil Award on 23 March 2021, expressed her views while talking to a local publication.

Other artists who received the civil awards besides Ali Zafar and Resham include Humayun Saeed, Bushra Ansari, Imran Qureshi, and Abida Parveen.

“I personally believe the choice for Pride of Performance is becoming increasingly simple and easy and as a result, a number of personalities who have dedicated their entire careers often go unnoticed,” said Samo.

“It is sad that the government has given such a huge award to people like Resham and Ali Zafar, who in my opinion don’t really deserve it,” she added.

While she expressed her joy for Bushra Ansari who was conferred with the civil award this year.

Sakina Samo also added that there should be some sort of financial reward alongside the trophy.

“There should be some sort of financial reward along with the trophy, such ventures should be incentivized in a better way,” she said.

Earlier, after receiving the award, Sakina Samo took to social media to share her sentiments on being conferred with the honour.

“Thank you, Pakistan for awarding me with this wonderful honour.  I am taking this opportunity to thank those who helped to pave the way for me. Thank you Bhai Manzoor Qurashi for introducing me to this magical world of art. Ada Mukhtiyar Laghari thank you for your unconditional support. Last but not least I dedicate my Pride Of Performance award to my late friend and teacher Director/Producer Haroon Rind and the beloved late Director/Producer Mohammad Bukhsh Samejo,” she wrote.

“Above all, I would like to see a prosperous and progressive Pakistan, one that coexists with our religious and traditional heritages. I am hoping for the elimination of poverty and violence -get beggars off the street through social work, housing schemes and unemployment benefits. Free and decent healthcare and schooling will be the key to a happy and healthy future for us all, including senior citizens who need quality care homes built by social security, ” she continued saying.

” I also want to congratulate all the frontline workers who have done an excellent job in fighting the spread of COVID-19. Compared to collapsing Western frontline services, Pakistan has endured this crisis with immense grace and patience. To the people of Pakistan,” Sakina concluded.