He wil be portraying a death row prisoner’s final moments! 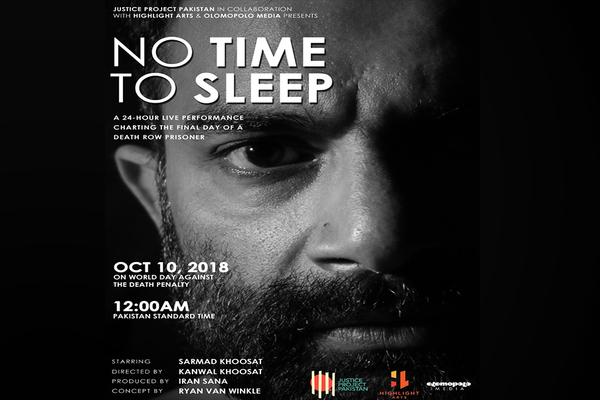 When it comes to acting and directing, Sarmad Khoosat is one of the finest talent Pakistan has produced. With the projects like Manto and Humsafar to his credit, Sarmad has set the bar really high. This time he is all set to bring something phenomenal. We have seen nothing like it yet!

Sarmad is all set to bring a nonstop 24 hrs. performance in an upcoming drama “No Time To Sleep”, which will be streamed live around the world. With the main concept given by Ryan van Winkle and a  Kanwal Khoosat  directorial, under the production of Iram Sana, No Time To Sleep will be live broadcast on dawn.com.

For this particular act, Sarmad is reported to be going through body transformation to look like the actual character. As he will be depicting the final days of Prisoner Z. who has been sentenced to death! The drama will go on air on 10th of October. The same day on which World Day Against the Death Penalty will fall.

There will be no breaks in the performance, the play will continue with the actors performing for a full 24 hours. Being streamed live, it means there won’t be any margin left for editing just like a live theater play.

Set inside a replica of an actual death cell, Prisoner Z’s journey will begin on 26th September, 2018 at 12:00 PM (PST) when his mercy petition is rejected.

Based upon the story of Prisoner Z, whose actual name was Zulfiqar and he was JPP’s first client, who spent 17 years on a death row. In that time, his execution was scheduled and stayed more than 20 times. During his incarceration, Zulfiqar educated hundreds of prisoners, securing 33 diplomas himself.

A social media prologue will portray live coverage from the moment of the execution warrant is issued to the process which is set out to carry his execution. The petitions filed in court, the media put on alert, to the moment when family is notified and the tragic moment of the last meeting with the Prisoner Z, everything will be portrayed in the continuous 24 hours’ performance!