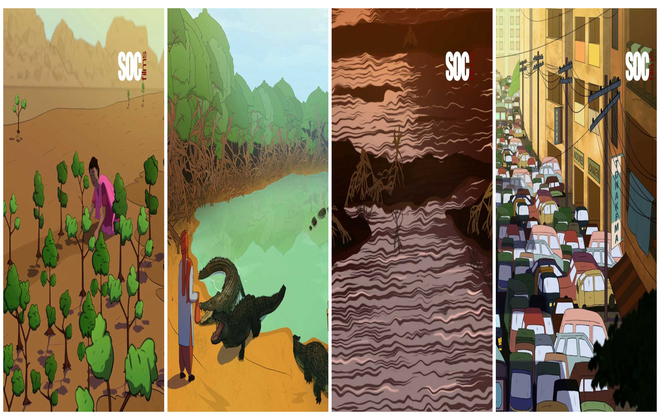 The last installment of film series explores the present day neglected area of Manghopir. Once clean and filled with crocodiles, the area is now highly polluted with its crocodile numbers dwindling.

The film is aimed at sending a message to children that we need to begin healing our environment. A process which begins with greater awareness and an understanding that anyone can reduce, reuse and recycle.

“There will come a time when our children will not benefit from Karachi’s biodiversity. We have to find a way to preserve our mangroves and the animals that inhabit it!” said Sharmeen Obaid-Chinoy.

The animated series is a public awareness campaign, in Urdu, with an aim to educate individuals about Climate Change and Global Warming and the steps they can take to make a positive collective change.

Indeed, with recent scientific findings speculating the rise of annual global temperatures heading towards 3°C, it is clear that the issues surrounding climate change and rapid global warming will soon become irreversible.

It is important now, for every citizen and country to take ownership and responsibility for what products they use and the rate at which they consume them. Each short-film has been conceptualized, produced and directed by SOC Films and will be between 2 to 3 minutes long.