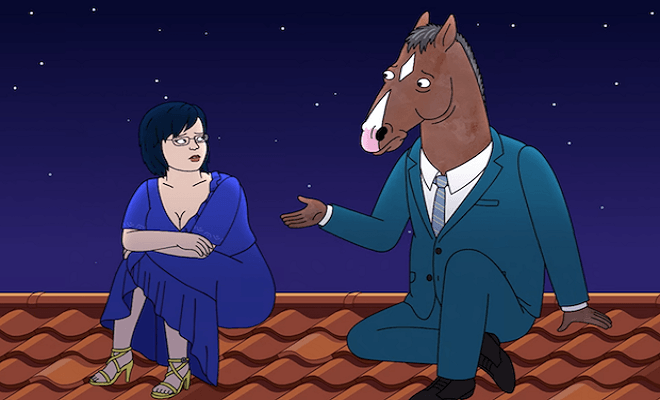 “Yeah, well, what are you gonna do? Life’s a bitch and then you die, right?”

“Sometimes. Sometimes life’s a bitch and then you keep living.”

And just like that, this half man half horse walked away from our lives. Leaving behind some loose strings with regards to his relationships. But essentially, we got we have become accustomed to getting by the writers of this rather beautifully dark series. No matter what, as long as there is a pulse, you have to make an effort. Even in the face of personal or professional failure, there is always room to find a glimmer of hope. Hope that can be addictive and disruptive.

The showrunners at some level break the norm and don’t give us emotional clarity. Is BoJack loveable, is he redeemable, is he inherently good? These questions to some degree remain unresolved. Perhaps to some, he is loveable, to others not so much. Perhaps that is how things ought to be in the real world. The sitcom format doesn’t always lend itself to such clarity. This was, well different.

The real-world change during the time since we first encountered this series. The MeToo movement has at the very least moved conversation. As much as “free speech enthusiasts” and “anti-cancel culture enthusiasts”, push the world is not going back to that era. The writers of this series beautifully weave those ideals in the story. In the last of the series, a carefully managed interview, followed by a disastrous one, tries to showcase that the past cannot be rejigged even by the best in the PR business (Princess Caroline).

More importantly, it creates an equilibrium of sorts. BoJack has supreme power over women. He used to perhaps at times unwittingly, to get what he inherently wanted. Desires, some problematic, some bordering on or simply illegal. Now, despite his repentance and desire to be a new BoJack, there has to be payback.

And yet, there is hope. The industry seems to be on the cusps of forgetting all the terrible things from his past. But those around him aren’t so sure. May be they, may be they won’t forgive this flawed character. And in this may be, perhaps, possibly and probably is life.

Kudos to a terrific show that spoke to us so intensely. So long BoJack, may you and all us find a way to deal with life.