Swift will be touring out on an international trek in June 2020. 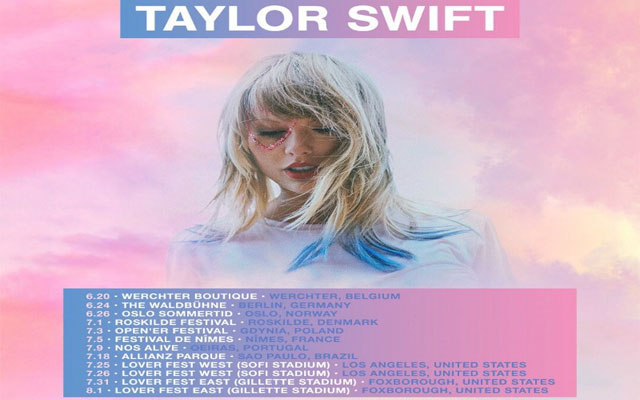 Taylor Swift’s fans gear up! After so many speculations about Swift’s tour, the singer has finally announced her US and international concert dates and festivals for 2020.

Swift, for her seventh studio album, Lover, made an announcement that she’ll be touring out on an international trek in June 2020.

She revealed that she’ll be playing shows throughout Europe and South America before heading to North America.

Read More : Taylor Swift shares a sneak peek about her tour for Lover

As the singer had said earlier that the Lover tour will be entirely different from Reputation tour and that will be a festival termed as “Lover Fest”.

The festivals include Lover Fest West and Lover Fest East will be the only US concert dates by 2020.

Swift will be the first woman to open a brand new NFL stadium as Lover Fest West on July 25 and 26 kicks off Los Angeles’ SoFi Stadium’s inaugural year of events.

The singer posted the dates of the tour on her Instagram handle. Lover tour will kick off in Belgium in June 2020 and U.S. tour dates will begin in July 2020.

The singer on her Instagram post about the upcoming tour, she wrote, “For me, the Lover album is open fields and sunsets and SUMMER. I want to celebrate the album and perform it live with you in a way that feels authentic to the music. I want to go to some places I haven’t been, and play festivals for the first time in ages…and where we didn’t have festivals, we made some. Introducing, Lover Fest East and West. Details and additional dates coming soon!”

As per the post, the announced dates of the tour are:

Earlier, Swift had almost denied the tour for Lover saying,“I’m not quite sure what we’re doing with touring because, with this album, I was so full-on planning this album release and directing the videos and putting all these different clues in these videos and trying to make this album release experience the most fun one for my fans, that I didn’t wanna plan what we’re gonna do in terms of life and I don’t want to do the same thing every time because I don’t want my life to feel like I’m on a treadmill”.

She went on with the statement, “There’s a lot that goes into touring that nobody knows,” including how stadiums have to be reserved “like a year and a half in advance and that to me is like a lot”.