The streaming giant Netflix on Thursday has dropped the teaser trailer of ‘Harry & Meghan’ documentary series about Britain’s Prince Harry and his wife.

It teaser just came out at the time when the British royals wrestle with a new race row. It was just a day ago when former royal lady-in-waiting Lady Susan Hussey resigned over “unacceptable” comments towards a Black guest visiting Buckingham Palace.

The docuseries: Harry & Meghan is set to premiere on December 8, featuring six episodes that will share “the other side” of their love story and the challenges they faced.

This image in the Megan and Harry teaser trailer, right after Harry says, “no one sees what’s happening behind closed doors.” Woah. 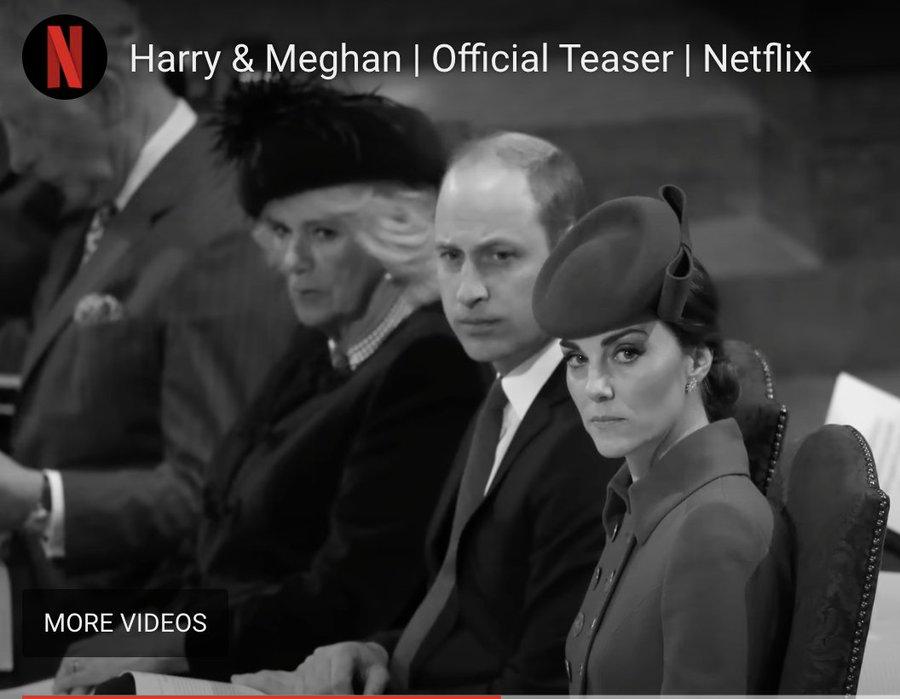 If you remember what made Meghan and Harry exit from the royal duties, the documentary is likely to hit the British monarchy below the belt.

And its the perfect timing as the senior royals Prince of Wales William and Duchess Kate are on a US visit.

The focus on Harry and Meghan comes as William and Kate make their first international trip since the death of Queen Elizabeth II and with their new titles of Prince and Princess of Wales.

Prince and Princess of Wales are due to meet U.S. President Joe Biden during as well during their first U.S. trip for eight years.

All sorts of reactions are poring in on Twitter timeline as soon as Netflix dropped Harry & Megan trailer:

So much is happening this week, it's hard to keep up but I am Looking forward to seeing this.

With ppl losing hair, eye lashes etc., I wonder what's going to happen when they see this?😱 https://t.co/50ZA8tiRS2

Thrilled to finally share the trailer for the project I’ve been working on, in secret, for the past year! Super grateful to @jon_bardin and the entire @storysyndicate_ team for bringing me on. What a ride! Stay tuned for details soon. https://t.co/ycVQRPxcma

As Prince William once said, "One lesson I've learned is you never let [the media] in too far, because it's very difficult to get them back out again. You've got to maintain a barrier and a boundary, because if both sides cross it, a lot of pain can come from it." https://t.co/Uxj7uap21c

Go on, you can say "THANK YOU HARRY AND MEGHAN FOR TAKING THE FOCUS OFF OUR DISASTROUS BOSTON TRIP!" https://t.co/BYHK7iNJYk

Netflix is showing how far they've fallen. They're losing subscribers and they're acting desperate. They're exploiting the timing of the death of HMTQ and of the royal visit by Prince William and Princess Catherine. It's a shameful display of lack of credibility and class.

The British royal family is getting what they deserve. No one in the family EVER spoke up for #HarryandMeghan, even when Meghan was pregnant with Archie & being ripped to shreds by the British press everyday to the point where she was suicidal. They can all go to hell.