The fun ride trailer of Total Dhamal is out!

The third film of the Dhamaal franchise is slated for February 22 release! 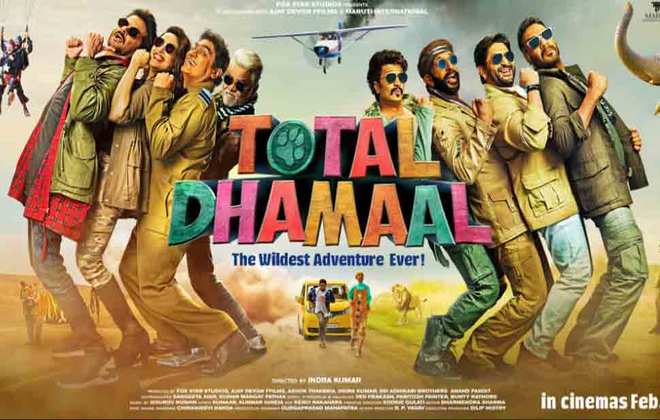 The much-anticipated trailer of the third sequel of Dhamaal franchise is finally out. The film titled “Total Dhamaal” was supposed to hit theaters last year, however, owing to special effects and a hard-hitting race the release was stalled till February 22, 2019.

The trailer begins with Manoj Pahwa’s character revealing that he has hidden Rs 50 crore somewhere just before he is declared dead.

The characters then form small teams and set out for an adventure full of laughter and in total chaos to find the hidden treasure. On their way, they meet several “Computer-Generated Imagery” animals.

The trailer is extremely loud, with CGI and visual effects are sloppy and comical but the performances are along the same mood which has been the flavor of the previous parts of the franchise.

Talking about the film release delay, Javed Jaffery revealed that, “There are lots of special effects in it and it was consuming a lot of time. Makers also felt that if they release the film in December then it wouldn’t be nice for the film as there are some big releases in that month and they didn’t want to compromise on anything that is the reason why they shifted it to February next year”.

This new film will not feature Sanjay Dutt. In the film Double Dhamaal, Sanjay played Kabir Nayak.  While, the three main actors of the film Riteish Deshmukh, Arshad Warsi and Javed Jaffrey remain the same in the new installment.