The film is already banned in Pakistan, Egypt and Iran. 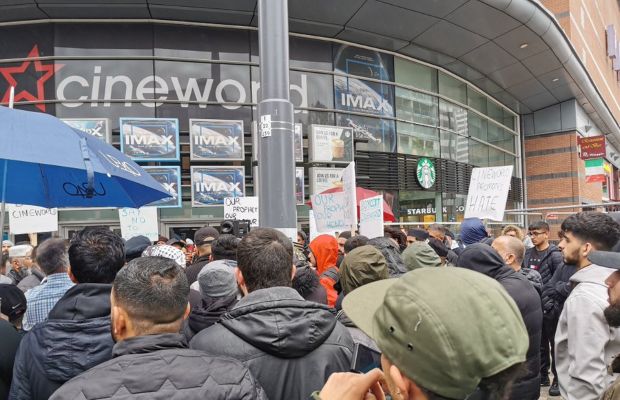 UK cinema chain has canceled the screenings of ‘blasphemous’ film The Lady of Heaven after protests, it emerges on Thursday.

As reported, Cineworld an Israeli-owned British movie theatre chain was forced to remove a controversial film about the daughter of Prophet Muhammad (PBUH) after ongoing protests by British Muslims in various cities.

Furthermore, an online petition calling for the film’s removal from all UK cinemas received over 123,000 signatures, with several British Muslim groups issuing statements in a protest calling it an act of blasphemy.

Cineworld in a statement issued on Tuesday said that it took the decision to cancel all showings of The Lady of Heaven’ to ensure the safety of staff and customers.

“Due to the recent incidents regarding screenings of ‘The Lady of Heaven’, we have made the decision to cancel upcoming screenings of the film nationwide to ensure the safety of our staff and customers,” Cineworld said in an email to the protesting groups.

“Please accept our sincere apologies for the caused inconvenience,” the chain said.

As reported, the film which was made at the cost of $15m, has already been banned in Egypt, Iran, and Pakistan.

The Irani clerics have also issued fatwas against watching it, stating it will cause discord among Sunni and Shia Muslims.