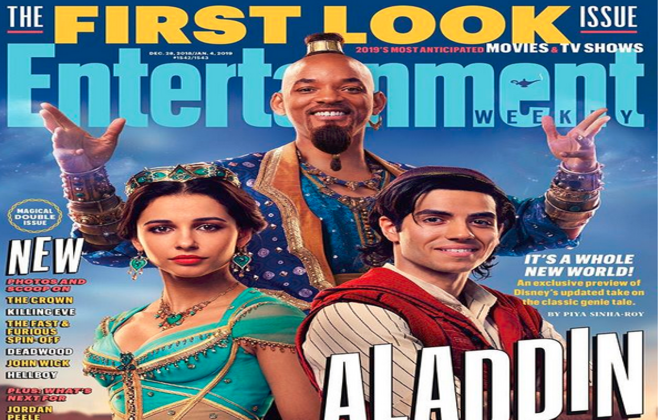 It was earlier in October, when Disney shared the first look of the classic Alladdin made into live-action film. This time it’s Will Smith who has shared the first glimpse of his avatar as the Genie.

In a post on his Instagram he has shared the magazine cover image featuring him as Geine, Mena Massoud as Aladdin and Naomi Scott as Princess Jasmine.

Sharing the first look, Will Smith wrote, “BAM!! First look at the Genie, Princess Jasmine, and #Aladdin! Check Me Rockin’ the Top Knot Ponytail Vibes in @entertainmentweekly (and yes, I’m gonna be BLUE! 🙂 )”.

According to Entertainment Weekly, director of the film has revealed about the character of Will Smith as the Genie. Ritchie told, “The great thing about the role of the Genie is that it’s essentially a hyperbole for who that individual actor is, so it’s a wonderful platform and tapestry for an actor to fill his boots on”.

Of course the bar is already set high, as the Aladdin’s Genie has been the most favourite character of its fans in the 90’s. As it was voiced by Robin Williams.

The weekly also reports, when Will Smith landed the role, the actor said that he needed to figure out which parts of the character hadn’t been touched by Williams, and leave his on trademark in those areas.

This live-action film is being helmed by Guy Ritchie with original composer Alan Menken collaborating with Benj Pasek and Justin Paul on new songs. John August has written the script of new “Aladdin”, his credits include “Big Fish”.