Zee5 is to get blocked in Pakistan and in near future, there will be no more news subscriptions and renewals permitted from Pakistan.

On Thursday, the State Bank of Pakistan, on orders of Cabinet division, has banned payments to the Zee5 streaming platform.

A notification has been issued by the State Bank of Pakistan, addressing all banks in the country.

The notice stated that a letter from the Cabinet Division of Pakistan has instructed to stop different modes of payments including credit cards for subscribing to Indian content including Zee5 video-on-demand service.

The notice has directed banks to submit compliance status to PSD, SBP by November 13, 2020. 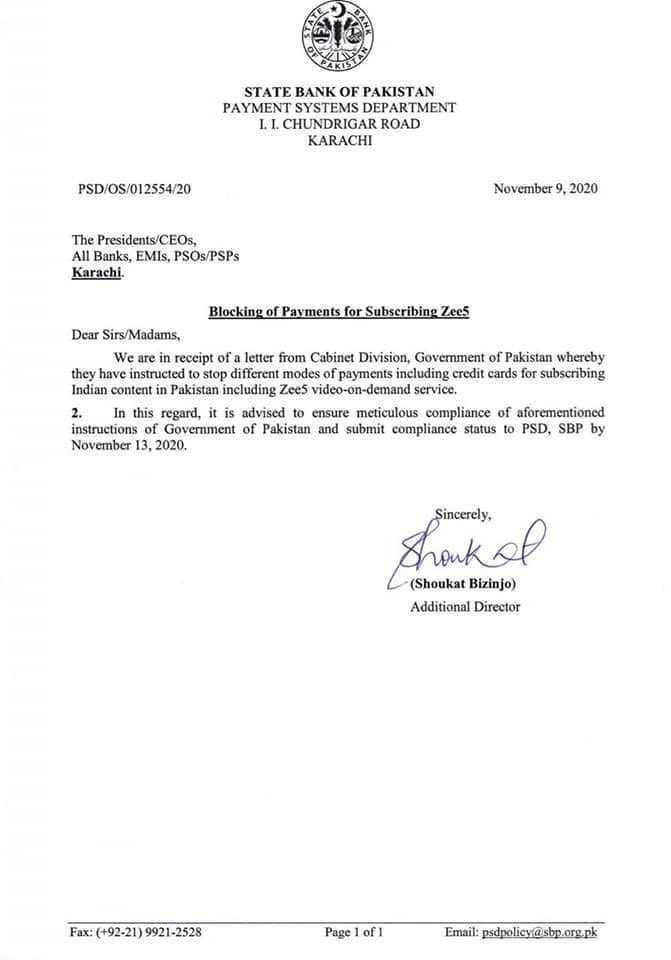 ZEE5 the online OTT platform is an Indian video-on-demand service run by Essel Group via its subsidiary Zee Entertainment Enterprises. While the ZEE5 mobile app is available on the Web, Android, iOS, Smart TVs, among other devices.

After the notification reactions from the Pakistani entertainment industry are pouring on social media.

There are a number of Pakistani productions launched on the OTT platform including web series Churails by Asim Abbasi and Mehreen Jabbar’s Ek Jhooti Love Story.

Some black and whites from #ekjhoothilovestory. They might have made it more difficult to access Zee5 in Pakistan at the moment but hope we find a way out of it because the only thing that will be hurt because of this ban is our own industry. @bilalabbas_khan @kiranhaqofficial @rabyakulsoomofficial @kinzarazzak @farihaafzalkhan @hiraa.m @jamilalvi @motioncontentgroup @zee5 @zindagiofficial