The birthday boy Akshay Kumar treats his fans with the poster of his upcoming film.

Film 2.0 is Rajinikanth and Akshay Kumar's first ever collaboration. 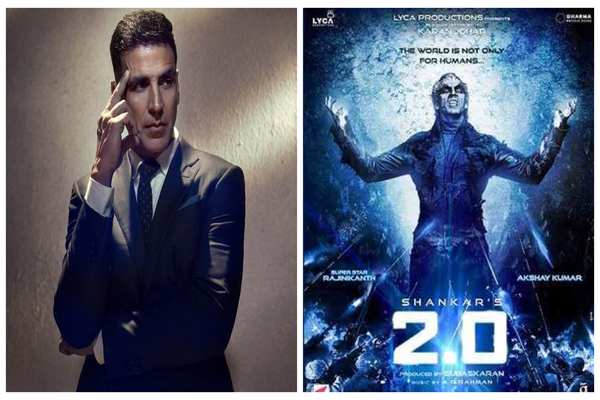 Bollywood star Akshay Kumar, who was celebrating his 51st birthday on 9th September treated his fans with the poster of his upcoming film. His character in this film is being discussed as his most powerful character. Akshay Kumar captioned his tweet, “”Here’s a special birthday treat for all my fans. Sharing with you my most powerful character and one which has probably stayed with me for the longest time (sic).”

The teaser of the upcoming Akshay Kumar and Rajinikanth, starrer 2.0 will be released ion 13th September. The action star himself seems to be counting the release date as he posted on social media captioning another photo of his character saying, “The wait ends in 4 days!”.
According to media reports the teaser has been delayed due to Kerala flooding as it was expected earlier on Indian independence day.

In 2.0, Akshay Kumar will be seen playing the villain. The get-up for the character has already made his fans excited. Helmed by S. Shankar, 2.0 is the sequel to the 2010 blockbuster hit “Enthiran aka Robot”, which also starred Aishwarya Rai Bachchan in the female lead role.

This much-anticipated film is going to the superstar Rajinikanth and Akshay Kumar’s first ever collaboration. The other star cast include stars Amy Jackson, Adil Hussain and Sudhanshu Pandey in main roles.

tweet
Share on FacebookShare on TwitterShare on PinterestShare on Reddit
Saman SiddiquiSeptember 10, 2018
the authorSaman Siddiqui
Saman Siddiqui, A freelance journalist with a Master’s Degree in Mass Communication and MS in Peace and Conflict Studies. Associated with the media industry since 2006. Experience in various capacities including Program Host, Researcher, News Producer, Documentary Making, Voice Over, Content Writing Copy Editing, and Blogging, and currently associated with OyeYeah since 2018, working as an Editor.
All posts bySaman Siddiqui