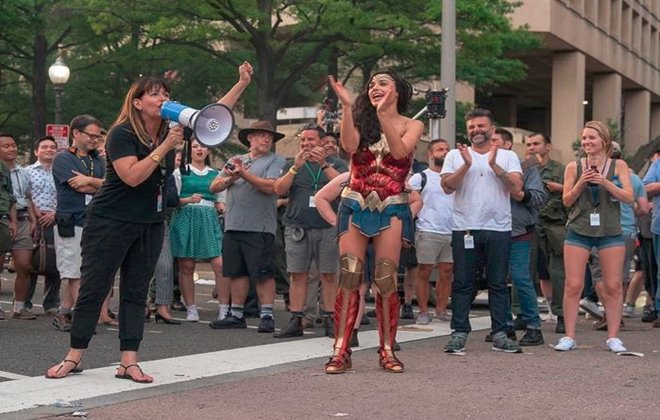 Actress Gal Gadot, shared her first look for Wonder Woman 1984 in the sequel earlier in June. This time she has shared the news via an Instagram post that the shooting of the sequel has been wrapped up.

She has penned down a detailed note while sharing few photos from the sets. She is seen along the director Patty Jenkins. The first stand-alone Wonder Woman film was also directed by Patty Jenkins and  broke many records at the box office.

Gal Gadot wrote, “We did it. Again!! And as much as the first time shooting Wonder Woman was amazing, this time was even more unique and special.. We shot in 4 very different locations in 3 countries, and I’m so soooo proud of the almost 1000 crew members who came to set every day, giving everything they have into our movie.

Couldn’t ask for better partners on this.. I’m so lucky to have the one and only Patty Jenkins, as my director. She always has our backs, she gives us the wings to dare, and everyday she helped us find the most creative version of ourselves .. I am so grateful to call her my friend. And to our AMAZINGly talented cast who made every day enjoyable and fun, thank you!”

Wonder Woman further added, “Honestly.. Words cannot describe this experience.. This journey was so demanding and challenging but we all came and did our very best every take, every day, putting our all out there and I’m so proud… Thank you universe for this opportunity. I love this character. And thank you to all of you for being the best fans in the world. It was you that made me push myself every day.”

The actress also wrote that that she couldn’t wait to share the film with fans in 2020. Wonder Woman 1984 is slated to for June 2020 release.

Wonder Woman 1984 takes a huge leap in time, as the first film was set during World War 1. Wonder Woman returned for a supporting role in 2017’s Justice League, which failed to match critical and commercial success of her solo film. lets see how this new film turns out to be.