“I am not trying to show controversy”, Sarmad Khoosat Says on Zindagi Tamasha

The film's story will revolve around blasphemy laws in Pakistan. 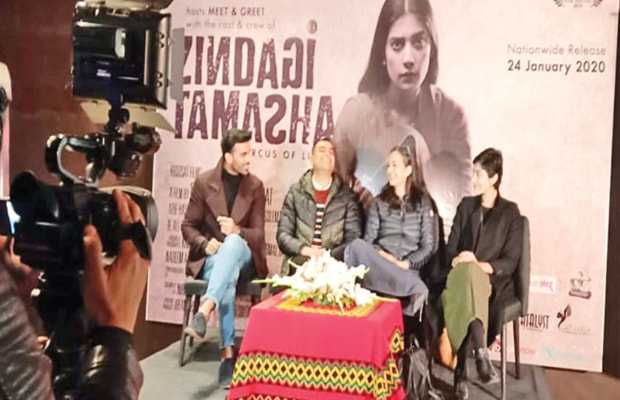 Sarmad Khoosat’s upcoming directorial Zindagi Tamasha is all set to release on January 24, 2020, however, prior to its release, the film has ended up upsetting a segment for its sensitive subject i.e. blasphemy.

“I’m not trying to show controversy,” said Sarmad in a recent meet and greet as he emphasized that the film is made with clean intentions without the purpose of hurting anyone’s sentiments.

“It is a story of tolerance, forbearance, and compassion, made only with a lot of love and solicitude over the past year,” the director continued.

Sarmad added that he understands how film is a complex medium so in the making of Zindagi Tamasha he has taken into account all sensibilities and maintained respect for masses and institutions.

“I request you all to please watch Zindagi Tamasha in cinemas and to let it speak to you as you please. It is a film about all of us, for all of us,” he stated.

At the meet and greet cast members of Zindagi Tamasha including Samiya Mumtaz, Eman Suleman, and Ali Qureshi were present alongside Nirmal Bano, writer of the film.

“The habit is that this is a film: this is the start, this is the middle and this is the end; there’s no such thing in this film. The reason there is excitement is that you can’t predict what happens next within the framework of the film,” said Samiya when Instep asked her if Zindagi Tamasha will e different than all releases of 2019.

Sarmad, however, did not make tall claims about his project ‘breaking the mold’ of traditional Pakistani cinema – particularly that has been presented in last year.

“God is not a fan of arrogance. Whether it can break any mold, the future will tell,” he said.

“Making a film is our responsibility; watching the film is yours but it can be said that the film has been made with clean intentions, and tells a story sensitively,” added Sarmad whose biggest wish is to see Zindagi Tamasha released for Pakistani audiences in addition to the international festivals its currently making rounds in.