The love story eats up too much space of the film 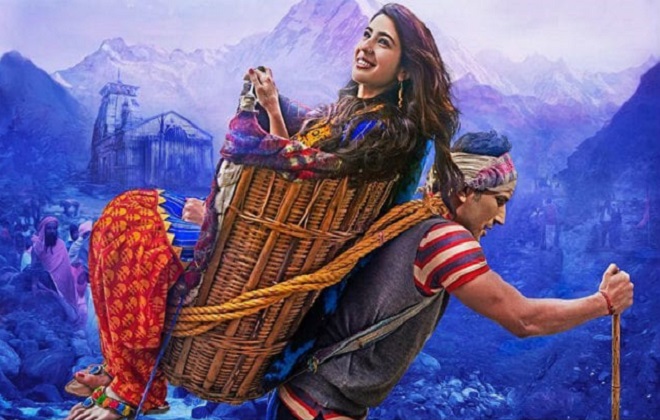 Young love. Not of the movie, but the cuddly and oddly loud couple that sat beside me in the cinema, were arguing about why the boyfriend had brought cold water as the advertisements ran. I knew my watery treat would constantly be interrupted by these two in love soul’s constant cackling and movements. Even in the progressively perceived Karachi, cinema is the only place for young ones to profess their ‘love’. What to do?

Anyhow, back to the movie. Kedarnath begins with the rain sound effect. A way of setting expectations of what to expect. For the Pakistan audience kept ill-informed about everything India, Kedarnath area (loosely termed) is a pilgrimage site. A 14 Kilometre stretch between Gauri Kund to Kedarnath is considered holy temple of Lord Shiva. Oddly enough and much like our own tourist spots, in one of the scenes I saw a fence painted with the Indian flag’s colours. Insecurity of the state isn’t limited to this side of the border.

The film is set the modern day backdrop of this very important site for Indian. So there are conflicts and loads of them. Mansoor Khan (Sushant Singh Rajput) helps pilgrims make that 14 kilometre journey either on his horse, or piggybacks them on those steep stairs. This is an ideal boy. Like his devoted late father, he sees his work as a ‘sewa’ and doesn’t care for money. He is respectful towards all religions, understands his limitations i.e. social status, loves his land, reveres his father for his bravery and selflessness, makes food for his mother, sees his girlfriend as an object of affection and is sexually passive. The manic pixie boy for sub continental middle class.

On the other hand, Mandakini (Sara Ali Khan) is the eccentric ‘Geet’ like daughter of stereotypical Pandit (Nitish Bharadwaj). She is outspoken, doesn’t care for tradition or izat, and wants to do her own thing. You know the type we have now seen as part of ‘liberal films’. The family is divided because, her sister blames Mandakini for stealing her fiancée (Nishant Dahiya). Mandakini, blames her father for falling flat on the whims and wishes of the fiancé, a business leader in the community.

Mandakini, for her part decides to rebel, calling one boy after another to ask for her ‘hand’. This infuriates her father and much involved fiancé. However, it all passes as being playful. However, with Mansoor the romance is real. They fell in love and share stories of their past hidden away in a cave. The love story quickly switches from Jab We Met to a Rockstar or Laila Majnu.

The lover and the fiancée initially clash over religion and social class. They have different outlook for the future. Suddenly, Mansoor is made to feel like an outsider but he fights. Soon, this clash of ideology becomes personal. The fight for Mandakini, takes the two leading actors into a different space. The love story which had been playful is now spiritual. It does feel forced.

Anyhow, it is implied, that the gods are not happy with how the society has treated these two younger lovers and hence those devastating floods. There is a line which goes ‘Bhagwan bhie bewpar chata hai’ (even God wants businesses to flourish). Perhaps that is why the gods were angry, resulting in floods.

This is where the film really gets interesting. All the religious, social, and language based skirmishes take a backseat as everyone fights for their lives. The VFX is fairly decent throughout. Mansoor, now gets his chance to shine. The film maker is able to create tension and you feel for everyone. The downside is the film takes so very long to build the love story, flood section of the film is simply not enough.

I have a lot of time for Sushant Singh Rajput as an actor. This relatively understated character, suits him and he makes the most outburst moments real. Sara Ali Khan is as bubbling in her debut role. She does look like her mother throughout the film. However, the onus was on her to make a rushed character change, look genuine. More experience actors would have faltered there. Kanika Dhillon an, writer of the film and director Abhishek Kapoor are unable to create a balance between the disaster and the love story. The love story is long, yet character changes looked enforced. Tushar Kanti Ray, however takes advantage of the locations of the film beautifully. The long shots just showcase how stunningly gorgeous the place is.  None of the songs really standout though.

The Titanic references are aplenty. However, the current climate of modern conflicted India comes through. It is what many expect from film makers, to present a counter narrative. Kedarnath offered a lot more than what it promised in the trailer. Like Pinky Memsaab, it is better to offer a mix of things, rather than offering no take on things. The setting of the film, provided an opportunity to the film makers and they took it. The story was intertwined with lots of conflicts before the floods broke it all up, much the like couple who were politely requested to sit in their own seats by the management. 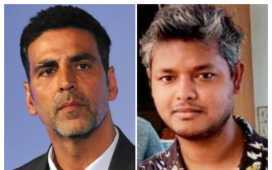