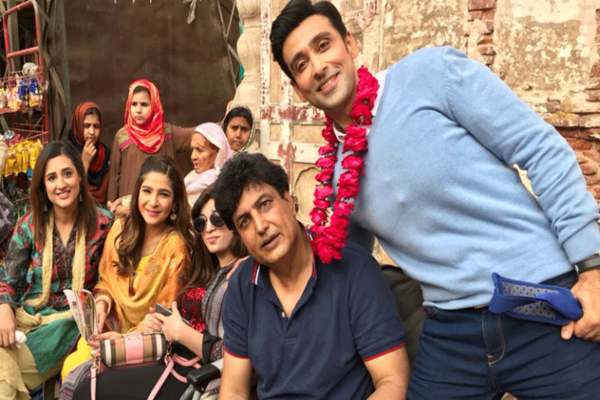 The incomplete love story from the partition era is about to get complete in present times, 2018. Written and being directed by award winning writer Khalil ur Rehman Qamar, Kaaf Kangana is entering into its last spell of shoot.

While talking to Oye Yeah, Khalil sahib shared that, “We are starting our last spell on October 23rd from Lahore Inshallah and will end in Bahawalpur by 24th of November”.

Director and writer of ‘Kaaf Kangana’ is well known for writing many plays as Sadqay Tumharay, Landa Bazar, Pyaray Afzal for which he bagged Lux Style Award, and famous Pakistani film Punjab Nahi Jaungi has been a major hit. Qamar, is now taking the director’s chair for his upcoming venture. And for this upcoming film stakes are already set high.

Kaaf Kangana, being been made in collaboration with ISPR is an intense romance with a touch of patriotism shot at various locations of Punjab.

Eshal Fayyaz aka Eshal Alam, is playing the character of an Indian girl Kangana who falls in love with a Pakistani Boy played by Sami Khan who happen to meet at a SAARC conference and fall in love. The film revolves around three characters. Ayesha Omar is playing the role of a girl from Lahore.

The other star cast includes Aabi Khan, Sajid Hassan, Waseem Abbass, Saba Faisal, Shamim Hilali, Bilal Choudry and Begum Khursheed Shahid. Khalil Sahab has given us a number of hits since his association with Pakistan and its television and film industry. Now, donning the director’s hat, let’s see how his film works out.