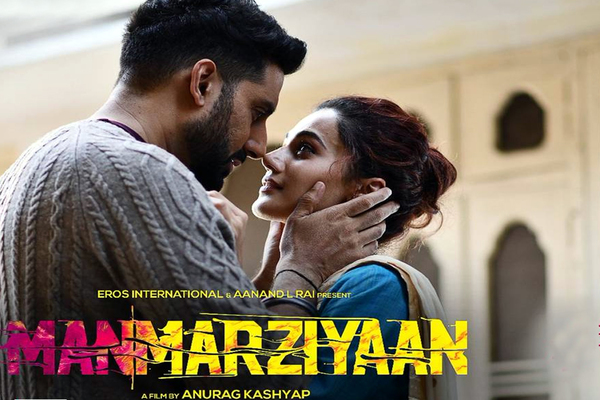 Rumi’s (Taapsee Pannu) bedroom cupboard has these ‘motivational stickers’. The ones which will the girl on. Not that the girl needs any more willing on anyway. Perhaps this is where our heroine gets all this energy. Energy for fyar (Kashyup’s latest invention, a cross between love and lust), energy for fights and somewhere hidden belief in love; love of Vicky (Vicky Kaushal). The duo is eccentric, they care for each other, but just not enough to overcome their doubts and vulnerabilities. Then there is Robbie (Abhishek Bachchan), our supposed hero. The man who seems selfless, but has a grain of selfishness.

On the outskirts, are their families, friends and a marriage bureau wala failing to understand their motivations. Vicky’s parents blame their own indulgence and upbringing for the inexplicable behavior of their son. Rumi is an orphan, is a tolerated by the family for her life choices. She was selected for state’s hockey camp but decides not to pursue it because some other hockey player had died. Happily admits to manipulating others by using her dead parents. She gets what she wants, but how do you react when she doesn’t know what she desires? Robbie’s problem is different. Everyone knows who he wants. The question is why. Why would you want to get involved in this mess? What is his motivation? The thing about with our supposed hero, is that he is not your stereotypical 3rd wheeling sacrificing type. Not to the fullest, at least.

Vicky is eccentric but not in essence, violent. He is happy to take a bullet for Rumi, but not brave enough to commit to marriage (or even a live in arrangement).  In the fear of losing Rumi for good, he attempts to make a change. But it’s like he is yet to convince himself of this change of heart. Rumi, gives her all to Vicky during those ‘steamy’ scenes or as she lectures her for his lack of responsibility. While, with Robbie, she is guarded. Robbie tries to slowly peel his way to her heart; which is certainly a rebel without any cause.

Essentially, these three forthright characters make Manmarziyaan. Their flip flops especially in the 1st half are engrossing and get you invested in their journey. The story here is about Rumi’s progression, her understanding of pyar, fyar and life; Vicky’s submission to the reality of his own motivations. & Robbie’s effort to overcome his doubts & complications to embrace Rumi as she is. Vicky is a DJ (DJ Sandz) while Robbie is a banker who calculates risk for a living. Polar opposites you would think but they aren’t quite there.  Director Anurag Kashyap and writer Kanika Dhillon create these magical characters and lay out in detail their journey.

And this why the film also gets repetitive. The back and forth went for so long, it leaves you feeling drained. These are complicated beings, sketching their conflicting pathway. But the amount of time they take to reach a conclusion, you have had enough with their compulsion. It’s the only flaw in an otherwise fascinating film. Anurag Kashyap’s take on love is as expected messy, complicated, and has a grey wala shade. It made for good cinema.

Taapsee Pannu is electric as Rumi. She displays a full grin when happy and is willing to cry her eyes out. She wears a confused look, doing things without being fully invested in them. Her scene with Robbie, where they are getting acquainted about ‘those little things’ is beautifully done. Robbie is absolutely brilliant when he plays this silent type. However, his outburst scene is overshadowed by Taapsee’s shocked face. Without saying much, she took away that scene. His love definitely showed in his actions but not much in expressions. While, Vicky Kaushal perfectly complements Rumi’s indecisiveness.  His character required bizarreness but grief too. He pulled it off with conviction.

Music and background by Amit Trivedi suits the mood of the film. It helps the narrative by following this ‘modern’ love story theme, using a mix of Hindi, Punjabi and English. As director, the stamp of Kashyup is all over the place.  The genre has changed, but you can tell who is behind this film easily. Two dancing girls as reflecting the state of mind of the performers are present and used cleverly.

This characters requires your undivided attention. Many times during the film you would like to scream at the screen: y tho?  It wouldn’t be in sympathy of these characters. Rather, it would be about how we have been conditioned to perform ourselves. Curbing our enthusiasm and instincts for what seems to be norm. These characters shatter those beliefs.

It’s a Kashyup love film, so it couldn’t have been a rom-com. Its complex, stretched out and at times dark; like most of our relationships!

P.S. Kudos to Capri Cinema and Cinegold (and others) who ran Manmarziyaan. Its time we stop this censor stupidity.