Life in a metro, goes dark

Do you ever wonder, why am I tolerating all this? Is it worth it to hear your boss ramble about things you simply don’t care about? Wait year along for peanuts and being told he company is undergoing a transition? Why pay for that TV bill, which offers either hate or simply gibberish? Why am I in this toxic relationship? Would it be simply better to let out an epic rant, breaking all levels of societal decency and tell everyone exactly what you think of them? You stop because you are a good person. Also what will you eat and where will you live post your rant. Only if there was some way out of this rotting cycle?

Really enjoyed the movie #Blackmail & thought @irrfank gave a masterful performance. It has so many hilarious moments! Highly recommended!#IrrfanKhan

The film starts with Dev finding out that he is being cheated by wife. He plans to take revenge, extract money and teach them a lesson, without being sure which one he really wants. What follows is an elaborate blackmailing fest, where we see various characters blackmailing/deceiving Dev, his wife Reena (Kirti Kulhari) and her lover Ranjeet (Arunoday Singh) for money. Everyone is willing to go some lengths and more for money. Ranjeet, who was going out with Reena, before her marriage, had to marry Dolly (Divya Dutta) for money. The money demands remain under 20000.

While Irrfan Khan brings the usual drive to the film, the pace of the film was a bit off. It became a wait for the almost inevitable to happen. Especially in the last hour felt a bit too much. However, the good smacks the bad out of the park in Blackmail. Watch for Irrfan Khan’s brilliance and how the director depicts the futile nature of modern day lives, our lives. 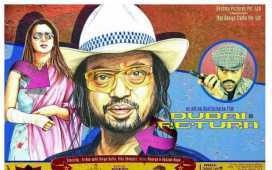