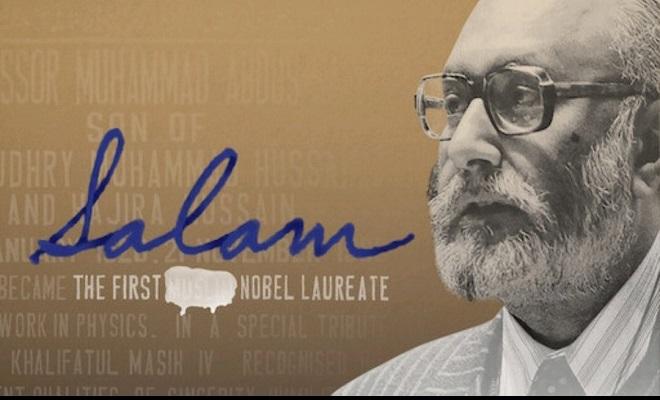 The last two months have seen Kashmiris jailed in their homes by their own democratically elected government. Like many, personally, I have been vocal about this issue on social media (lazy attempt at ‘doing something’). I have never been asked by anyone if I am Kashmiri, even sarcastically. During the last Pakistani election cycle when Jibran Nasir was raising his voice against discrimination of Ahmedis, I was sharing similar thoughts again on social media. Some of my closest friends joked that I had converted to marry an Ahmedi girl or took money.

The hate, prejudice, bigotry, and ignorance are very deep-rooted. Salam – The First ****** Nobel Laureate partly reflects these very factors pervasive in our society. The self-inflicted harm our obsession with religion has brought is under the spotlight. Apart from the religious debate, the documentary touches quite a few raw nerves in a subtle manner, such as Pakistan’s nuclear program, the Afghan war, and dictatorships.

The documentary begins and ends with the massive funeral of the great man. Droves of men eager to pay their respect one last time, to someone who always felt their pain.  That is the theme of the documentary. Dr. Salam’s love for his homeland, his religion, and his people. When accepting the Nobel Prize, he wore a sherwani, pagg and Saleem Shahi khussay. In his eyes, he had overcome prejudice to achieve some great things and dreamed of paving a new way for young folks from his region to follow.

The documentary took 14 years to complete. Director Anand Kamalkar slowly pieces together the different aspects of the life of Dr. Salam backed with extensive research and getting access to a lot of historical footage. A lot of footage has been destroyed by Pakistan Television Network, it is alleged by many.

Initially, we are told about his upbringing. From the very start, he was seen as a standout child in the home. Typically, this meant preferential treatment from the parents. The educational journey he goes through is looked at. However, we could have benefitted a bit more with a deeper analysis of how this particular subject interested him.

Going forward, we are made aware of the genius of the man, his fight against systematic racism against people of colour.  The formation of the International Centre for Theoretical Physics is explained. Significant time is devoted to discussing his role in setting up the infrastructure that led to Pakistan attaining a long-held goal, the “Islamic nuclear bomb”. Here, the contradictions of the state are highlighted. A secular man Zulfiqar Ali Bhutto brings him into the fold to do the groundwork but once he declares Ahmedi’s as non-Muslim that relationship ends. Later Zia ul Haq, a staunch reactionary Islamist publically embraces Dr. Salam after his Nobel Prize.

Some of the lesser-known incidents documented are most interesting. Dr. Salam had come up with a theory and sent it to a senior scientist, who rejected it. A duo of scientists published a similar theory and won the Nobel Prize before Dr. Salam. His response was to later teach students in class ‘Never listen to grand old men’.

We also see his sons, two wives, and personal assistant give insight into the life of the man. He fits the stereotype of a somewhat eccentric genius. He was slightly distant from his children. With his assistant, he would lose his temper often. However, he had his own way to make up. We also meet the Imam of the mosque where he used to pray. This chapter is fascinating, which connects his belief in religion with science.

And that remains a central theme of the documentary. Dr. Salam had pursued excellence in the field of Physics, partially motivated by the brick walls he faced for being who he was. The racism and prejudice he was fighting against so vigorously also willed him, on to go further. When Pakistan decided to take away his religious identity from him, it had a lasting impact on his life. When it comes from those who you considered your own it is much harder to comprehend and make your peace with it. He lived with that burden.

But in death, he decided that he wanted to be buried in his home. He had forgotten. But Pakistan hadn’t. So on his tombstone, the word Muslim has been painted out from the title ‘the First Muslim Nobel Laureate’.