Saif Ali Khan will be seen playing the role of the Rajput commander in Mughal empire. 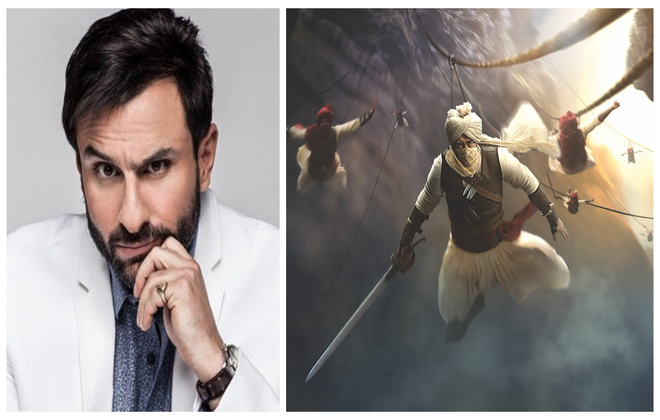 It was earlier when the filmmakers shared the first look of Ajay Devgn in upcoming film Tannaji. And the made the Aajay fans are going  gaga over it.

But according to latest reports, Saif Ali Khan is going to play the role of villain in this Ajay Devgn starrer.
Taanaji is reported to be a historical film which will be narrating the story of the battle of Sinhagad on the silver screen.

The Battle of Sinhagad took place during the night on 4 February 1670 on the fort of Sinhagad near the city of Pune, Maharashtra, India.

The battle was fought between Tanaji Malusare, a Koli commander of Maratha ruler Shivaji Maharaj and Udaybhan Rathod, fort keeper under Jai Singh I who was a Mughal Army Chief.

For this film, Ajay Devgan will be playing the role of Maratha empire warrior Taanaji Malsure. And as news reports confirm, Saif Ali Khan will be seen playing the role Udaibhan Singh Rathod who was the Rajput commander in Mughal empire.

Let’s see how this historical film turns out to be. As previous Bollywood historical films landed up all sort of controversies before and after their release.

Saif Ali Khan is having a bad time at the box office with his recent releases. But he has surprised everyone with his performance in Netflix’s Web-Series ‘Sacred Games’. Let’s see how this Taanaji turns out to be.

tweet
Share on FacebookShare on TwitterShare on PinterestShare on Reddit
Saman SiddiquiJanuary 5, 2019
the authorSaman Siddiqui
Saman Siddiqui, A freelance journalist with a Master’s Degree in Mass Communication and MS in Peace and Conflict Studies. Associated with the media industry since 2006. Experience in various capacities including Program Host, Researcher, News Producer, Documentary Making, Voice Over, Content Writing Copy Editing, and Blogging, and currently associated with OyeYeah since 2018, working as an Editor.
All posts bySaman Siddiqui