Not much has been done in the thriller and action genre of films, a feat the makers of upcoming Urdu feature film Gumm… In the Middle of Nowhere hope to achieve. 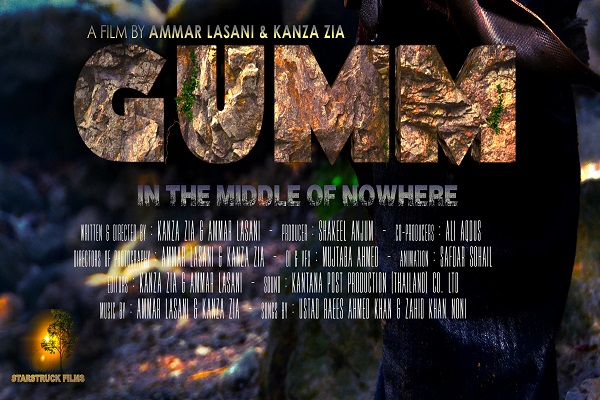 We’ve been seeing lots of good commercial Pakistani cinema lately, with romantic comedies and family dramas like Punjab Nahi Jaungi and Cake dominating the screen. But not much has been done in the thriller and action genre of films, a feat the makers of upcoming Urdu feature film Gumm… In the Middle of Nowhere hope to achieve.

Starring Shamoon Abbasi, Sami Khan and Shameen Khan, Gumm is an action-packed thriller with romance and drama. The story revolves around the male protagonists, who are linked via a chain of events. The film was shot in Islamabad, with most of the scenes taking place in the thick jungles, deep in Margalla Hills.

As it goes for most thrillers, Ammar Lasani and Kanza Zia, who are first-time filmmakers, did not reveal more about the plot. But they promise Gumm will keep the audience engaged even if the sound was turned off.

Lasani and Zia were studying filmmaking at the New York Film Academy in Los Angeles where they began working on the script for Gumm.

After graduation, the duo refused many job offers from production houses in Hollywood to return to Pakistan and contribute to the Pakistani film industry.

“We wanted to make a film that would place the Pakistani film industry on the world map,” Zia said as she spoke of her experience studying in the film academy in the US.

“We had colleagues from all over the world. But nobody knew of the Pakistani film industry, which was quite disappointing,” she said. “Our industry is undergoing a much-needed overhaul, and I think it is time we start getting international acclaim.”

Speaking of which, Gumm was nominated for the Best Picture and Best Director categories at the Festigious International Film Festival, an IMDb qualifying monthly film festival, also praised as the “Queen of Online Festivals”. The film also won big at the LA Film Festival.

“We wanted to make a film that would not only please the Pakistani audience but would also appeal to international film critics,” Zia said.

As for the protagonists, the directors said the audience will get to see them in a new light.

“Viewers will see Sami and Shamoon in an avatar that is completely different from their television personas.”

A release date of the film has not been announced, but Sami Khan, the lead of the film confirms it for sometime next year, and its first-look poster is out. And by the looks of it, we can’t wait to find out more about Gumm… pun intended!

Note: The article was contributed by Yusra Jabeen