How To Train Your Dragon 3 trailer prepares fans for a Hiccup without Toothless. 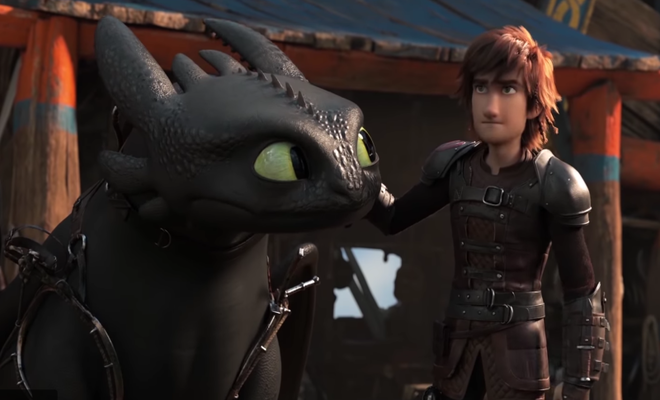 The new trailer provides a glimpse at how Hiccup comes up against a new enemy, the one that wants to wipe out all of the dragons. And Hiccup realizes that the only way to protect the dragons is to get them back to their hidden world. So that’s the title all about. Meanwhile, the matters get a bit complicated as Toothless meets a potential mating partner.

There is going to be an inevitable separation of Hiccup and Toothless in the upcoming final part of the film. Making many of the fans all around the world sad, as this pair of human and dragon won’t be retiring back. The franchise writer/director Dean DeBlois has already stated that this film is going to be the final installment of the franchise.

Earlier this year, DeBlois stated, “We thought about it for a long time and came up with what we think is a bittersweet way to say goodbye to these characters, but the right way”.

The film’s first trailer showed Hiccup as an adult, telling a story about the dragons that used to live in his world. He says, “there were dragons when I was a boy”. That already left the fans wondering what would become of Toothless and the others.

Deblois already told that there would be an answer to that potentially heartbreaking question. The director already confirmed that, “You will understand why Hiccup says, as you heard in the trailer, ‘There were dragons when I was a boy.’ And by the end of this film, you’ll have answered the question [of] what could have happened to them”.

Starring Jay Baruchel, America Ferrera, Cate Blanchett, Kit Harrington, Craig Ferguson and F. Murray Abraham, among others, animated film is slated for release in the UK on February 1, 2019 and in the US on March 1, 2019.

tweet
Share on FacebookShare on TwitterShare on PinterestShare on Reddit
Saman SiddiquiOctober 27, 2018
the authorSaman Siddiqui
Saman Siddiqui, A freelance journalist with a Master’s Degree in Mass Communication and MS in Peace and Conflict Studies. Associated with the media industry since 2006. Experience in various capacities including Program Host, Researcher, News Producer, Documentary Making, Voice Over, Content Writing Copy Editing, and Blogging, and currently associated with OyeYeah since 2018, working as an Editor.
All posts bySaman Siddiqui