Asma Nabeel is a writer par excellence, we say this because, we have seen this lady conquer grounds and bring out taboo subjects with her pen, that none dared talk about earlier. From the plights of a transgender child in Khuda Mera Bhi Hai to bonded labor in Bandi, Asma Nabeel has addressed serious issues that have plagued this society since forever.

And this time, the strong-willed lady, is now gearing up to tackle another big subject, breast cancer and its awareness. With the power of her pen and her production house Crew Films, Asma Nabeel has announced her next cinematic venture, titled Fly.

However, what sets Fly apart from all other films lined up for production and release in Pakistan, is the fact that this will be dealing with breast cancer awareness at its core. Asma Nabeel calls Fly, a love story that will melt hearts and knowing how she weaves her tales, the film will definitely be something to look out for. 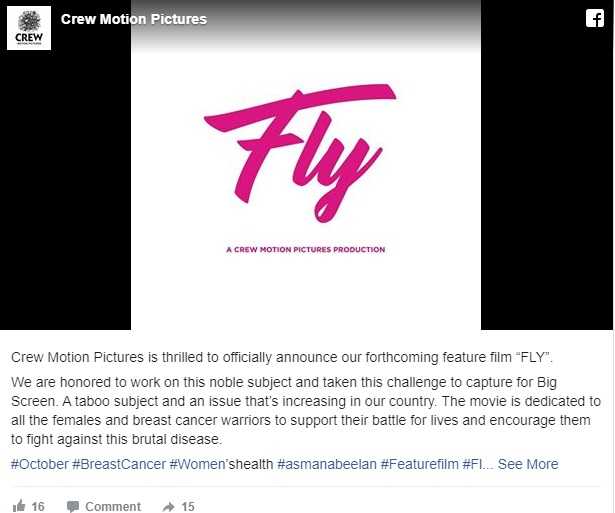 “Crew Motion Pictures is thrilled to officially announce our forthcoming feature film “FLY”. We are honored to work on this noble subject and taken this challenge to capture for Big Screen. A taboo subject and an issue that’s increasing in our country. The movie is dedicated to all the females and breast cancer warriors to support their battle for lives and encourage them to fight against this brutal disease,” wrote Crew Motion Pictures on their Facebook.

The cast and the crew for Fly are yet to be announced but we know Nabeel will be writing the film. Herself being a cancer survivor, Asma, holds the subject very close to her heart and we’d love to see how she’ll spin out a tale with this.