Steven Spielberg said the Netflix series "Squid Game" proves that "unknown people can star entire miniseries, can be in movies. 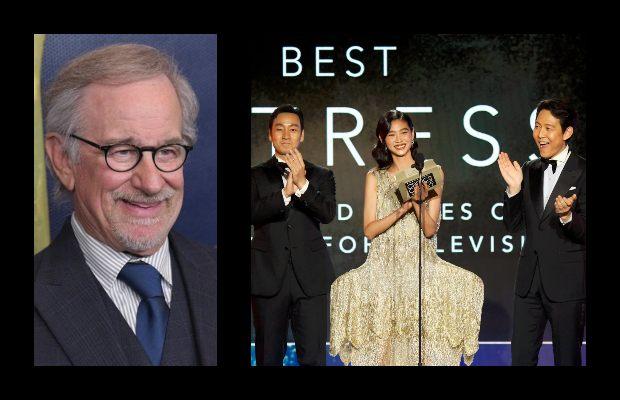 Steven Spielberg is getting heat for comments he made about Korean actors of Netflix’s Squid Game!

The critically-acclaimed director came under fire for comments he made at the PGA Awards panel over the weekend.

The Korean star cast of Squid Games has already won a couple of international allocates and yet Spielberg hasn’t heard of them!

The cast of #SquidGame were all smiles at the 2022 #CriticsChoiceAwards ! 🦑

“A long time ago, it was domestic stars that brought the audience into movies,” Spielberg said.

“Today, it’s interesting, unknown people can star entire miniseries, can be in movies.”

“Squid Game” comes along and changes the math entirely for all of us,” the “West Side Story” filmmaker added before directing his attention to Netflix’s co-CEO and chief content officer Ted Sarandos. “Thank you, Ted.”

Well, the whole world knows that the Squid Game is a 2021 South Korean production that took over the international viewers by surprise and brought in very high ratings for the streamer.

It is pertinent to mention here that the stars featuring in the Squid Game series have been in the South Korean entertainment industry for quite some time.

Maybe Spielberg is unaware of film and tv stars other than Hollywood.

Netizens were quick to slam Spielberg on social media for his ignorant comments.

Unknown ????OMG 🤐
By the way , Steven Spielberg is who?? Actor? , supporting actor?, journalist? .
I never ever have been seen him in any film yet . I’m sorry in advance if he is famous in somewhere 🙏 pic.twitter.com/swvyszYKvg

I suggest we massively forget who Steven Spielberg is, to give him a taste of his own medicine you know. https://t.co/RqqSSip8DO

Even if you're pointing on the female lead & your point is to say "not only big names can lead successful shows"You shouldn't use "unknown" Steven!
There're globally known bright stars with long full of success career appearing in the show you mentioned!https://t.co/3GvwoGDcDu

Folks, today's whitest take, brought to you by Mr. Steven Spielberg and the LITERAL all-star cast of "Squid Game" https://t.co/Lq2Oko8yJ6

Argggg more ethnocentrism courtesy of Americans who can't see past their own borders. What series like Squid Game illustrate is exactly the opposite: that people around the world are satisfied with content other than English/white/US entertainment.https://t.co/T2jM0Y9Ns3 https://t.co/clXfkmeyXk

stop giving steven spielberg attention. he literally has nothing to say. https://t.co/GlFk5r6vSB