What has Tom Cruise done to his face? 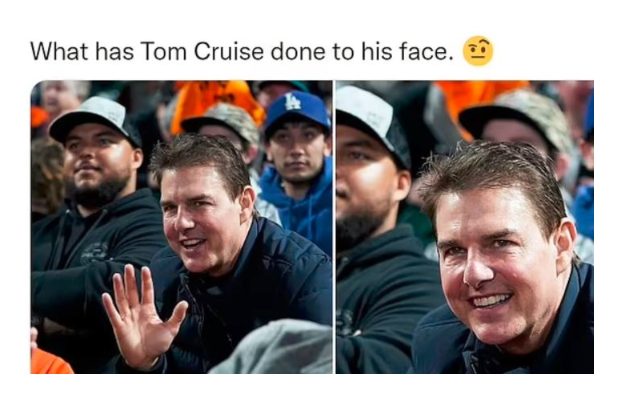 The heartthrob star is one of Hollywood’s most enduring A-list action heroes and for fans, who never seems to have had aged.

However, Tom Cruise on Saturday night, appeared almost unrecognizable to some fans, as he enjoyed Game 2 of the National League Division Series in San Francisco.

‘What has Tom Cruise done to his face?’ that was the reaction of the majority!

NEW#TomCruise at a Baseball Game between San Francisco Giants and the Los Angeles Dodgers in San Francisco. He was there with his Son Connor. pic.twitter.com/NoDZ3FtaHh

Saw this referenced on my timeline four times before I realized it's not a joke about some sportscasters mistakenly thinking some random guy is Tom Cruise. That's actually Tom Cruise. https://t.co/8jigqTuIGE

Gonna spend the rest of tonight and all of tomorrow wondering if some random dude convinced the Giants he was Tom Cruise.

norm macdonald faked his own death to murder tom cruise and assume his life pic.twitter.com/Te3AIQjqST

Norm Macdonald’s ghost has taken over Tom Cruise. Only god knows what this entails https://t.co/qeM33OjQYW

Looks like when patients get steroid moon face. Or like my aunts who had filler done to smooth out wrinkles, but ended up looking bloated instead. Also the dude is like 60. I always forget that when I see his movies.

It just can't be. This photo is from June. No way he's changed that much. pic.twitter.com/JFnJLGErDY

Is that really Tom Cruise or is that another deepfake 🤔

We just have to accept how Tom Cruise looks now. We can’t do this every time there’s a new photo.

We're Officially Worried About Tom Cruise After Seeing Him at the Giants-Dodgers Playoff Game This Weekend https://t.co/FR10842dFM pic.twitter.com/nVbjiauyR5