A bunch of players from the Turkish football team Ankara sat together on the field to break their fast with water and dates. 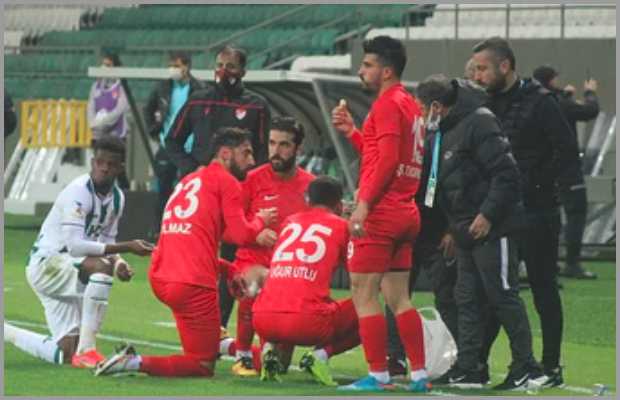 A video of Turkish footballers breaking fast during the match wins the internet!

A video clip is doing rounds on social media featuring Turkish Muslim footballers who played the match on the first Ramadan and broke the fast taking a short break on the field.

Reportedly a break was taken during the match after an injury occurred which coincided with the Maghrib call to prayer hence, players took the opportunity to break their fasts.

A bunch of players from the Turkish football team Ankara sat together on the field to break their fast with water and dates.

The video clip has garnered immense attention from internet users in Pakistan and across the world.

This is phenomenal. May Allah make it easy for these players. Fasting and playing football wow!!

I don’t even follow Islam but something beautiful about watching footballers do this mid game, massive respect to the club and players for allowing this to happen.

Several social media users extended prayers for the players and wished them success.

How these Muslim footballers combine fasting and soccer is amazing. It’s not easy . They will still give 10/10 performance. Big ups to all of them

Isn’t this common and basic? Been doing this since I was at least 9 during martial arts classes & I’ve seen Muslims do it mid-session my entire life.

May Allah reward these footballers, but no idea why they’re being idolised. Didn’t know the bar has become that low https://t.co/iIs9DhmmgS

There were a few pieces of advice from the social media users for the management to reschedule the football matches after the fast for Muslim players who are observing obligatory fasts in the month of Ramadan.

This is nice to see, but shouldn't football authorities see there's a need for 1 minute break for Muslim footballers to break their fast?
Everyone knows this is the month of Ramadan.