his is being caused by a combination of factors including an overall change in behaviour and diet, an aging population, and an increase in awareness. 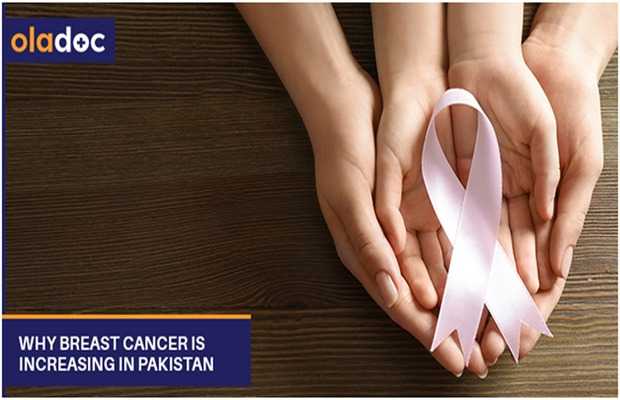 Although breast cancer is a leading cause of death for women all over the world, Pakistan in particular is suffering more than most, it currently has the highest rate of breast cancer in all of Asia. We have seen a steady increase in breast cancer rates all over Pakistan during the last decade. According to some recent studies, the rate of breast cancer is only going to increase over the next few years, going up by 130% by the year 2025 when compared to 2015. This is being caused by a combination of factors including an overall change in behaviour and diet, an aging population, and an increase in awareness.

Before we discuss these various factors it is important to note that it is impossible to determine exactly how much each of these factors is contributing to the overall problem. This is mainly due to the lack of concrete data available in Pakistan.

Behaviour
Some studies have pointed out that Pakistan has seen an increase in cancer-causing behaviours in both men and women over the last few years. These behaviours include tobacco use, physical inactivity, and poor diets that involve a large amount of processed food. All of these things have been linked to cancer time and time again by studies all over the world, so it is no surprise that as they grow in popularity in Pakistan, the rate of cancer will grow with them. The increase in the availability of fast food is also partially to blame for this as fast food and junk food have been linked to breast cancer before.

The Aging Population
It is of course also entirely possible that much of this increase is not due to any increase in the cancer rate overall, but just because the population is aging. It is expected over the next few years that a larger percentage of the population will be between 60 and 75 years of age. This is mainly due to wider societal factors that are beyond the scope of this article. This increase in age will also lead to an increase in the incidence of age-related diseases, such as breast cancer which is most common in post-menopausal women. So it may be that the rate of cancer isn’t really increasing, just the number of people who are at the highest risk. The overall increase in life expectancy is also a leading cause of increased cancer rates, as older people are more prone to all kinds of cancers.

Oladoc- a digital healthcare company has taken upon itself to address the issue of breast cancer awareness. The company has launched a breast cancer awareness campaign which is supposed to run throughout October. The oladoc team is consistently producing content written and approved by breast cancer doctors and surgeons along with uploading doctors’ interviews on their disease awareness channel on Youtube which has an audience of more than half a million people. With this campaign, Oladoc hopes to wedge the gap between the rising cases of the disease in Pakistan and people’s awareness level about it.

Overall it is important to take note of this increase and take more precautions. Adjustments to diet and behaviour can go a long way when it comes to cancer risk. Most importantly of all, it is essential to consult a breast doctor or get tested regularly. Catching the cancer early often exponentially increases the survival rate.