“Poor, but not irresponsible” says the poverty-trashing caption of the poster! 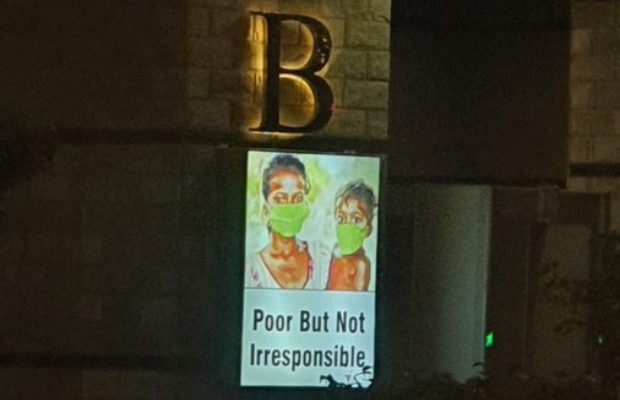 The poster posted on the entrance of the mall having the caption “Poor, but not irresponsible” feels the most disgusting copy written ever by the creative team hired for the job.

It fails to deliver whether it was a ‘public service message’ intended to teach affluent mall visitors to learn from the lower-income class to wear masks in public.

At first glance, it seems the most absurd thing giving a feel as if people belonging to the lower-income class are not allowed the enter the mall!

The images circulating on social media also caught the attention of PPP senator Sherry Rehman who retweeted the message with a caption saying: ” Unbelievable! “Poor, but not irresponsible!” goes the dehumanising, classist, poverty-trashing caption. Marie Antoinette has finally been outdone.”

Reactions continue to pour in on social media:

Even if we give a benefit of doubt for having some deep 'moral based' meaning for our educated (rich) class, still, it sounds highly inappropriate.

Should be asked to remove @hamzashafqaat

This is at Centaurus Mall #Islamabad. What are they suggesting? pic.twitter.com/8NbiP9PCh9

Our elite are crass on a different level https://t.co/TwHcDod2wK

tweet
Share on FacebookShare on TwitterShare on PinterestShare on Reddit
Saman SiddiquiNovember 13, 2021
the authorSaman Siddiqui
Saman Siddiqui, A freelance journalist with a Master’s Degree in Mass Communication and MS in Peace and Conflict Studies. Associated with the media industry since 2006. Experience in various capacities including Program Host, Researcher, News Producer, Documentary Making, Voice Over, Content Writing Copy Editing, and Blogging, and currently associated with OyeYeah since 2018, working as an Editor.
All posts bySaman Siddiqui