Five Ponte Vedra High students have been identified by investigators as having hoisted the shark at the school on Davis Park Road. 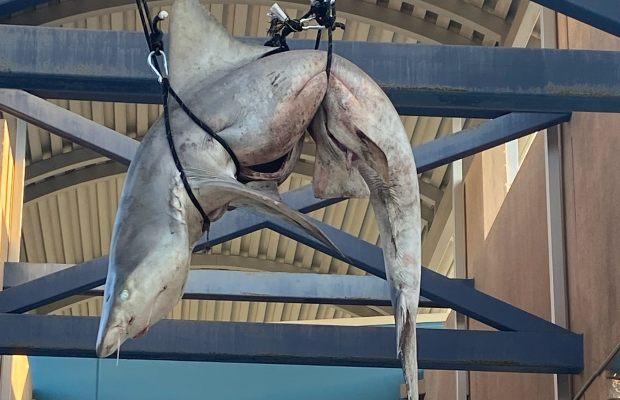 A dead shark was found hanging from rafters at a High School in the US state of Florida.

As reported, a  dead shark was found hanging from the rafters above a staircase at Ponte Vedra High School on Thursday morning, according to the St. Johns County School District.

The discovery was made at about 8 a.m. local time after which the shark was cut down and removed.

As reported five students have been identified as involved in the activity apparently a senior prank that went terribly wrong.

The five Ponte Vedra High students have been identified by investigators as having hoisted the shark at the school on Davis Park Road.

The St. Johns County Sheriff’s Office confirmed it’s believed to be a school prank, while the Florida Fish and Wildlife Conservation Commission is leading the investigation.

According to the district,  it has turned over surveillance video of the shark being hung up to the St. Johns County Sheriff’s Office.

The CCTV video will not be released as it is evidence in a criminal investigation.

The photos of the huge shark hanging with the rafters went viral on social media.

While a change.org petition has also been initiated by an animal advocacy group that is getting shared online that seeks signatures in support of seeking criminal charges against five accused students for hoisting a dead shark above a stairwell at Ponte Veda High School.

Please sign & share our petition requesting that the five people responsible for killing, gutting and hanging a shark in the rafters of a Ponte Vedra High School as a senior prank be held accountable and punished to the full extent of the law pic.twitter.com/hZMiJe01ta

We are working to find out more about a shark, which appears to be gutted, hung up at Ponte Vedra High School.

St Johns Co. Schools confirms they removed the dead shark at 8am.

A student told me it was a senior prank, we have reached out to FWC to see if they are investigating. pic.twitter.com/JzJMDPkHji

They gutted it alive, tossing the organs & 5 babies into the ocean.

Then hug it up in school as a sick prank. The school mascot is a 🦈. pic.twitter.com/1ciEqmkiOW

This is why the world is in such a dire state, even in todays day & age this senseless killing continues!!! our amazing megafauna stand little chance when climate change is knocking on our door when we do this to them as well 🤬🤬🤬 Florida high school shark prank & manta fishery pic.twitter.com/d4dFnODCjB