The video has racked up over 30 million views in a day. 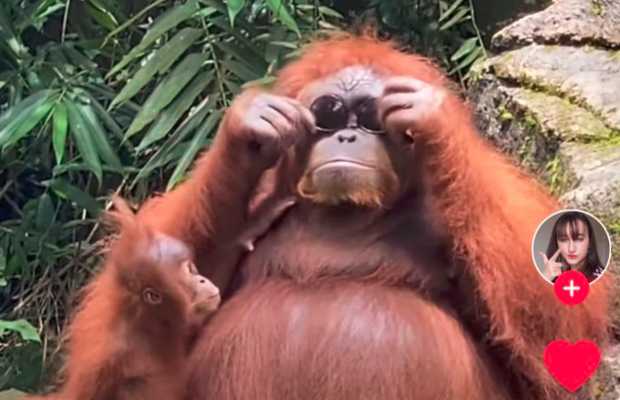 This Orangutan is the coolest thing you can find on the internet today after a video clip goes viral on social media.

A large female monkey, who was carrying her baby, walked over to the sunglasses after they fell inside the grounds of Taman Safari Park in Bogor, Indonesia.

A Park visitor named Lolita Tetsu shared her account as she was watching the orangutans, her glasses slipped off the top of her head and fell into the enclosure.

She said: “I was leaning over to look at the orangutans at the back of the enclosure when my sunglasses fell off my head.

“After a few minutes, one of the orangutan moms came over and picked up the glasses, and the rest is filmed!” she added.

The can be seen orangutan playing with the glasses, trying to figure out exactly how they would sit on his head.

Lolita Testu, who goes by @minorcrimes on Instagram and TikTok revealed the incident on social media by sharing the clip on TikTok with a caption saying, “So I’m down a pair of sunglasses but up a very good story.

The video has racked up over 30 million views in a day.

Though TikTok is banned in Pakistan, the viral clip is also available on other platforms.

Many of the Twitter users found the incident the most amazing thing on the internet.

Literally the most wholesome thing on the internet today. pic.twitter.com/6pPBBeJiIf

Many social media users have flooded the Twitter feed with their comments praising the video’s orangutan star.

How on earth did she figure out the glasses was meant for the eyes??? I just can't get my mind around that. This is sooo cute and funny 😂😂😂

“Is that Elton John,” a person tweeted.

Is that Elton John? pic.twitter.com/7ft5p0nFZc