The teaser for Tere Bajon was released on YouTube recently. 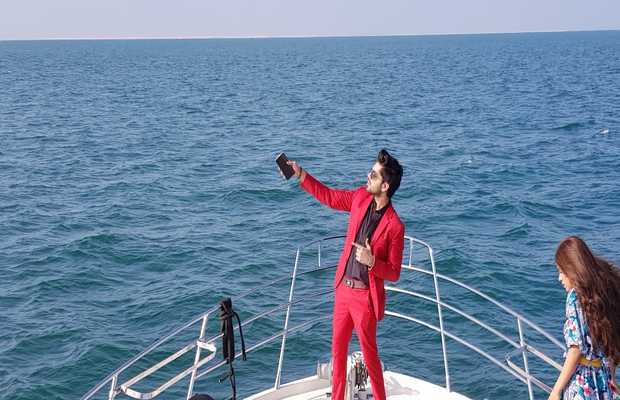 In the Pakistani music industry, this is the day and age of upcoming emerging talents making their way through a sea of aspiring artists, and taking the spotlight. Abdullah Muzaffar is one of these fantastic musicians, and we can’t wait for him to drop his next single, Tere Bajon!

The teaser for Tere Bajon was released on YouTube recently, and its beat combined with the little video we have gotten to witness so far makes it seem quite promising! The video looks like it has been filmed at multiple locations, including a desert, the sea, and a majestic city skyline. With the presence of a gorgeous female model, we are sure it is a romantic number and are intrigued about what beauty Abdullah Muzaffar is about to bring forth.

Abdullah Muzaffar has slowly been garnering fame over the last couple of years with his contemporary music and now carries the following of a whopping 1.3 million fans on Facebook! He has managed to enchant quite a huge number on other social sites like Instagram and YouTube as well with his soulful voice.

Starting off with Marjawan, a Punjabi track full of intensity and pain of the broken heart, the singer managed to grab the attention of his crowds immediately. Over the years he has released a number of single tracks, along with quite a few performances in concerts, showcasing his singing prowess to the world.

A few of his songs that have caught our eye include Besabra. Released in 2019 in association with the famed T-Series, Besabra is a light, refreshing song portraying some impressive musical work on the saxophone, combined with Abdullah Muzaffar’s cheerful voice. It has the cutest video of budding love between two college mates and triggers a wave of nostalgia for us. Haven’t we all been there? The song’s video received 3.7 million views on YouTube, which is phenomenal!

His cover of Mehdi Hasan sahab’s Duniya Kisi Ke Pyaar Main is a heart-touching tribute to the legendary singer from the Pakistani music industry. Abdullah Muzaffar has managed to paint the song with his own color and it sure gave us goosebumps.
A few of his other songs include Beh Jaun, Yaadan, Dil Mera, Raakh, etc. A lot of Abdullah Muzaffar’s videos give us an old-school Strings vibe and considering how much we all adore Strings, this sort of works for the singer.

This guy is young and energetic, and as soon as he dons a pair of eyeglasses, he gives us complete vibes of the Professor from Money Heist! Enough to get the ladies to give him all their attention!

So all of you music fans out there, make way for Abdullah Muzaffar’s latest single Tere Bajon, that is ready to be released on YouTube and other musical platforms in the next few days.

Keep an eye out for it, because your ears and your heart and all of your senses are in for a treat!