Auj being crowned Season 4 winner, they join a prestigious lineup of previous crown-bearers in Aaroh, Kashmir, and Bayaan. 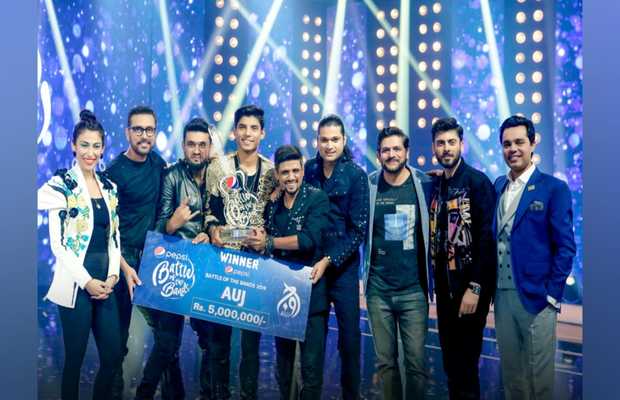 And the two-month-long journey has finally come to an end. After weeks of intense competition and intensive hard work, the final battle narrowed down to Auj and Aarish, who became the two finalists of Pepsi Battle of the Bands season four.

Read More : Pepsi Battle of the Bands Season 4 Episode 7: Aarish and Auj bring their A-game in the Final Battle! 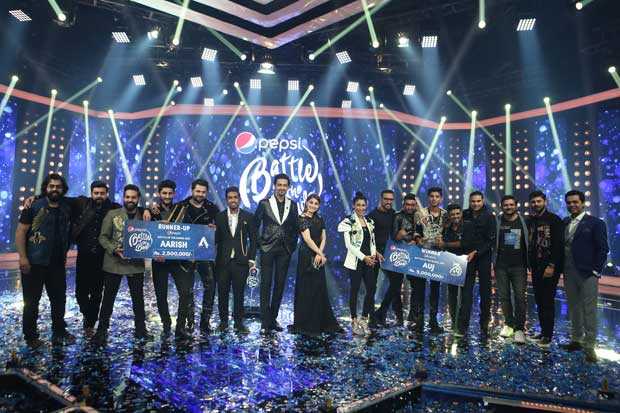 After an eternity of anticipation, co-host Hina Altaf announced the winner of Pepsi Battle of the Bands Season 4: Auj. With intense competition from an underdog in Aarish, Auj reigned supreme in the biggest battle and took home the crown, along with Rs50 lac, an album contract and lifetime royalties of the original songs performed during the course of the season.

Aarish, the ever-competitive runner-up, proved to be a more than worthy opponent for Auj. For their incredible journey and effort and talent, they took home Rs25 lac and an album contract.

During the episode, after entire Pakistan had voted to make their favorite band be crowned the Pepsi throne, our finalists stepped foot in the battlefield one last time to entertain the crowd on the grand blue stage. But before that, the grand finale held a ton of other surprise performances for the audience.

We started off the episode with a mashup duet ‘Dhaltay Rahay’ by Pepsi Battle of the Bands season two and three winners Kashmir and Bayaan. In what was a performance as immersive as virtual reality and as wholesome as Andre Rieu’s Johann Strauss Orchestra by the 11 men on stage, it set the mood perfectly for the magnificent occasion of the coronation of the Pepsi Battle of the Bands season four crown-bearer. 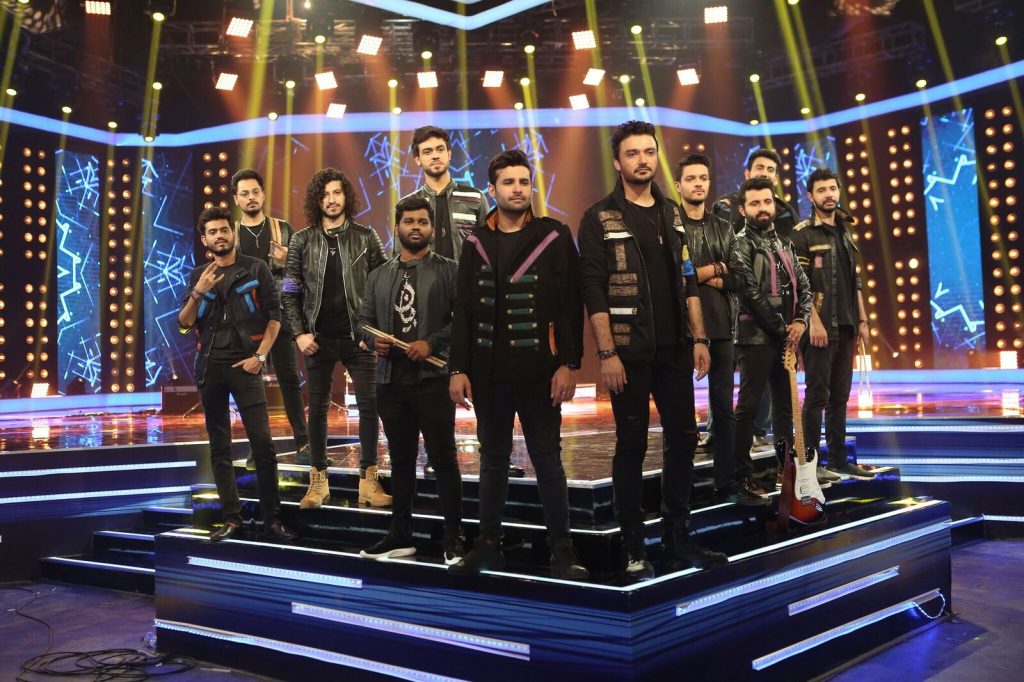 But before that, the occasion also meant other big names also wanted a piece of the cake and perform on the Pepsi stage. Shahi Hasan, Qawwal Fareed Ayaz and Abu Muhammad, Asad Ahmed Guitars, Imran Akhund Guitars, Imad Rehman Keyboards, and electronic percussions. 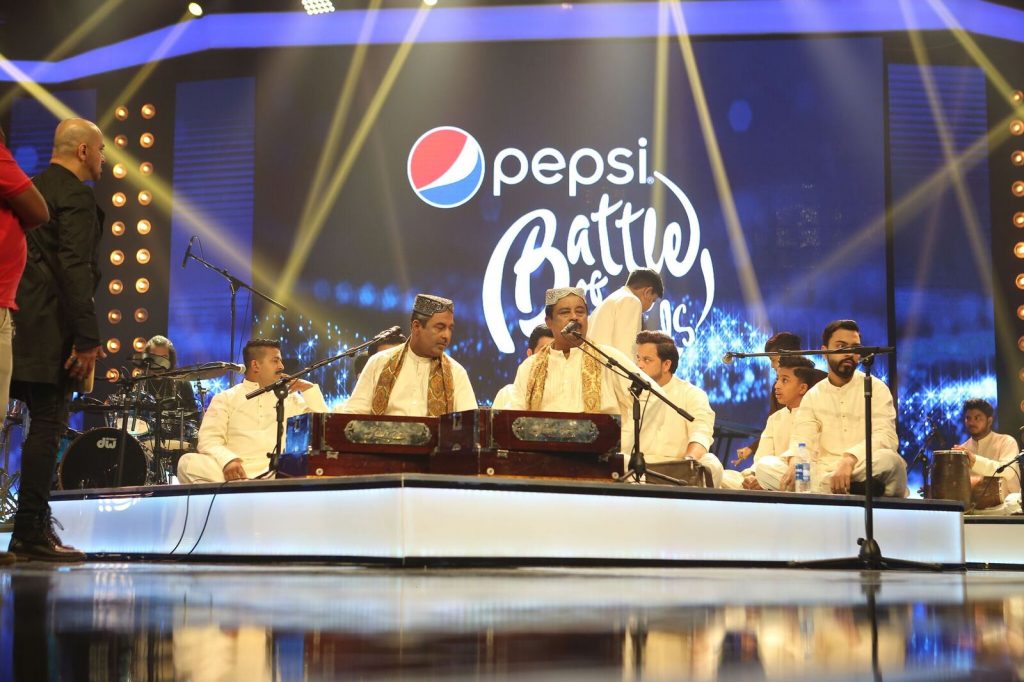 Salman Rafiq (Fifu) Drums and Percussion and a vocalist/rapper Maria performed a song ‘Jaag Musafir’ which fused spoken word, rap, and qawwali composed by Hasan four years ago. The performance, which rivaled Greek composer Yanni’s in terms of grandiosity and control, undoubtedly elevated the prestige of the stage and was fitting for the season four finale.

Moving forward, we meet the families of Aarish band members, who recounted their childhood anecdotes. The band members, then, also traced through their whole journey going back to Pepsi Battle of the Bands season two, and performed for the last time this season on the stage. Their original ‘Pukaar’ earned them their last standing ovation of the season and Aarish went out with a bang. 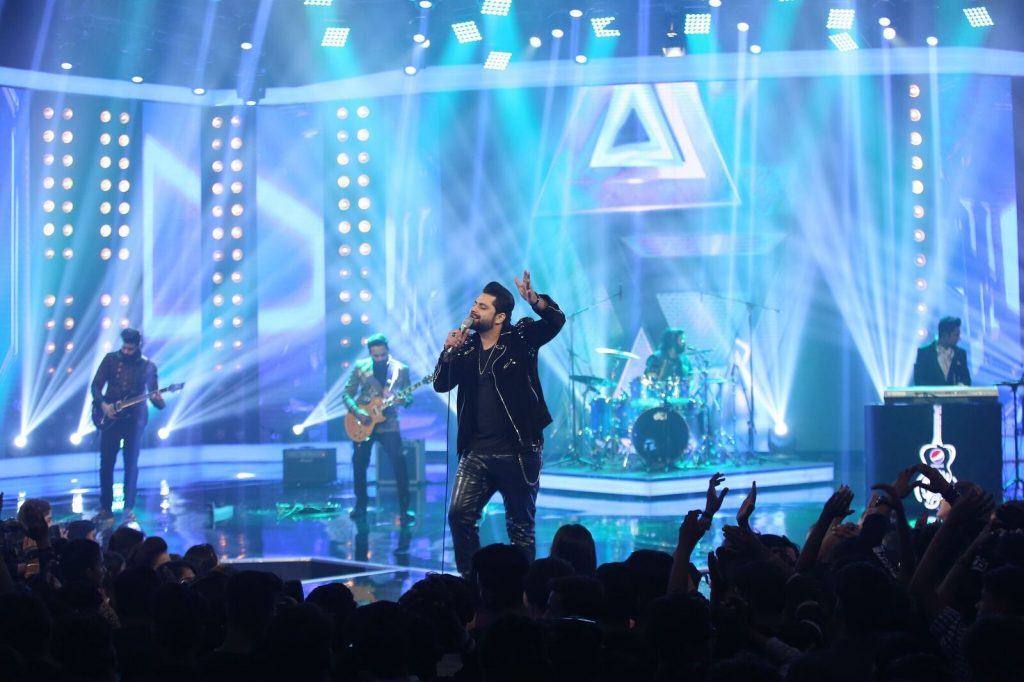 After establishing a theatrical tradition on Pepsi Battle of the Bands with ‘Mein’ last year, Meesha Shafi returned to follow up on it with a performance of ‘Leila’. The word ‘Leila’, as Shafi explained, comes from Sanskrit and the poetry revolves around a conversation between a girl and the moon. Staying true to the poetic essence of the verses, the performance was as dreamy as they come with Shafi’s costume right out of a Sanjay Leela Bhansali film. 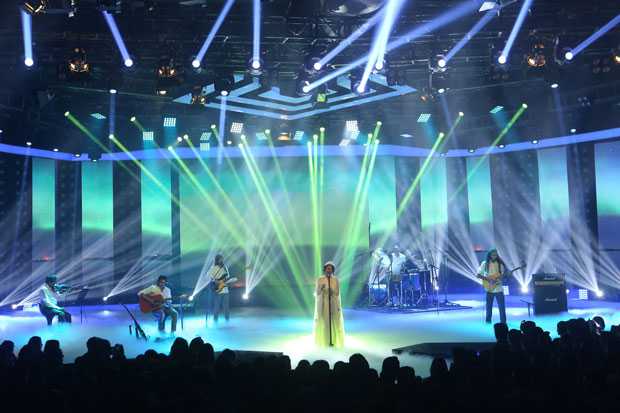 Next up, we meet Auj band members’ families who talk about their stories and struggles and Auj’s incredible rise. The finalist band then performed their original called ‘Aansu’ as the last performance of this season, which again earned them a standing ovation. 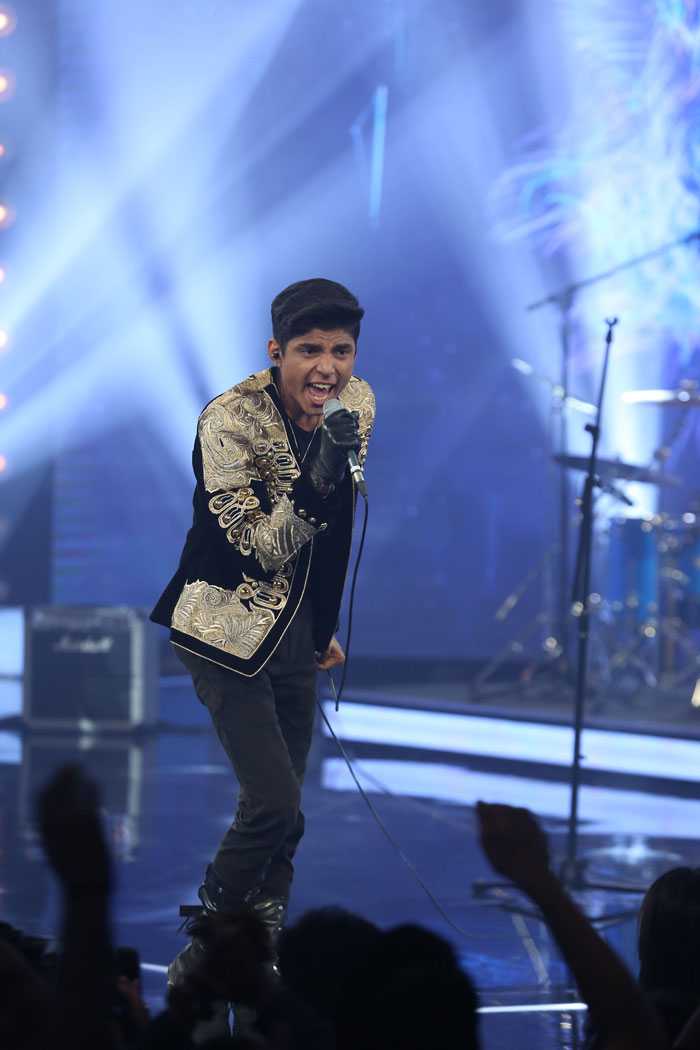 Now, of course, it couldn’t be Pepsi Battle of the Bands finale without having Fawad Khan perform. And that’s what he did, bringing his old EP gang back including Xulfi. They performed a song called ‘”Jaag Musafir’ which narrated a conversation an individual and time itself. Perhaps the best way to describe the performance would be ‘timeless’. 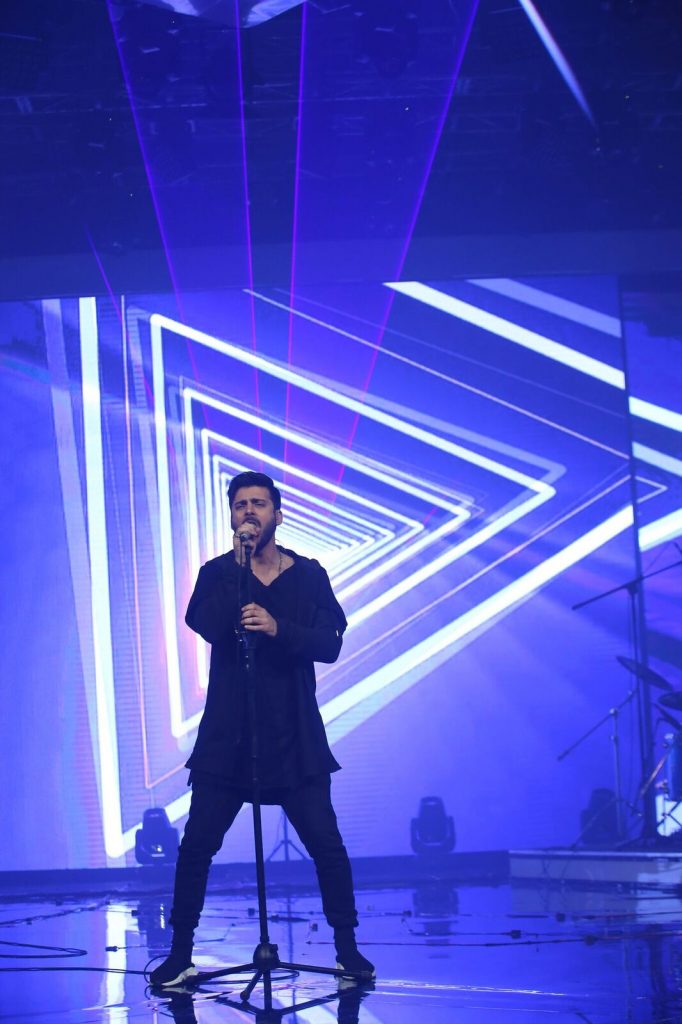 Speaking of timeless, the veterans of the industry, the timeless duo of Bilal Maqsood and Faisal Kapadia, Strings performed a new original called ‘Hum Aaye’ in what was the episode last performance. And what a way to end the season!

Then it was time for what we have been waiting for the last two months: the results. The hosts called on stage the marketing director of PepsiCo Saad Munawar to share a few words and award the trophy to the winner. He spoke of the need to produce original music in Pakistan and how Pepsi is serving that purpose. 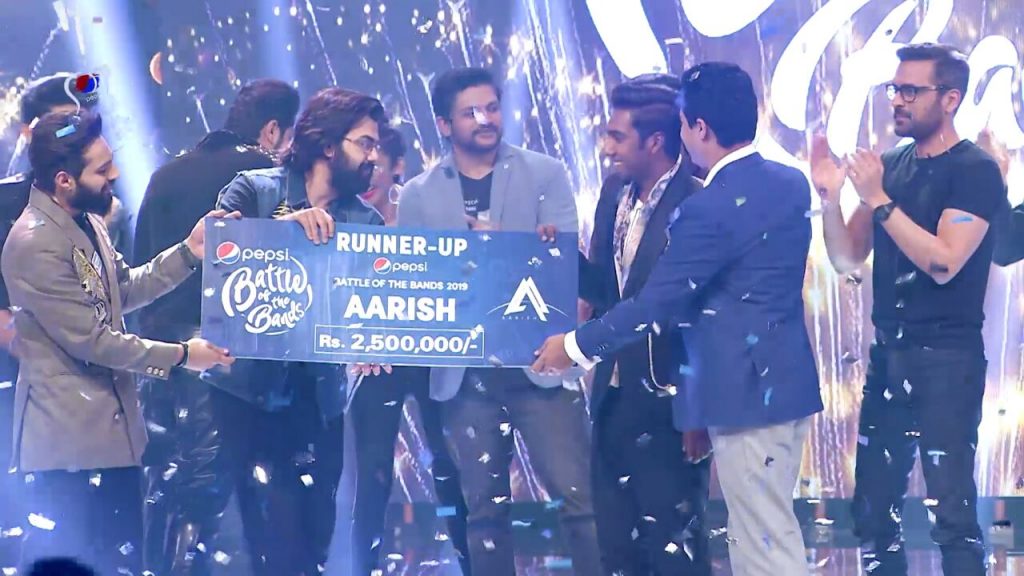 With Auj being crowned the Pepsi Battle of the Bands season four winner, they join a prestigious lineup of previous crown-bearers in Aaroh, Kashmir, and Bayaan. Here’s to Auj, Aarish, and most importantly, the rise of original music thanks to Pepsi!

tweet
Share on FacebookShare on TwitterShare on PinterestShare on Reddit
Saman SiddiquiAugust 25, 2019
the authorSaman Siddiqui
Saman Siddiqui, A freelance journalist with a Master’s Degree in Mass Communication and MS in Peace and Conflict Studies. Associated with the media industry since 2006. Experience in various capacities including Program Host, Researcher, News Producer, Documentary Making, Voice Over, Content Writing Copy Editing, and Blogging, and currently associated with OyeYeah since 2018, working as an Editor.
All posts bySaman Siddiqui