Qubool is about falling in love, saying I do and yet learning to agree to disagree for life with love. 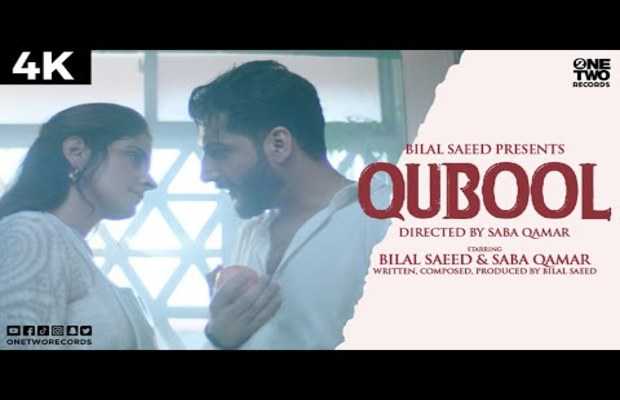 Bilal Saeed And Saba Qamar’s Qubool is finally out. The teaser of the music video had landed the Qubool’s team in hot water for having the intro session being shot at the historic Wazir Khan Mosque.

And Bilal Saeed promised while making an apology for removing the controversial scenes from the music video, it is out with any hint of Mosque Nikkah scenes.

The video also marks the directorial debut of Saba Qamar, and we must say it’s a refreshing addition to the field. Produced under the banner of One Two records, the music video is a collaborative effort by Bilal and Saba.

Now brushing off the recent controversy, music fans can enjoy Bilal Saeed’s latest Punjabi number with the video that hints at the love and conflict relationship between the newlyweds.

“Qubool is about falling in love, saying I do and yet learning to agree to disagree for life with love. Whether you have been together a year, a decade, or a half-century; Qubool is the perfect cute-sweet melody that gives you a reason to share a smile with your partner”, says official synopsis.

tweet
Share on FacebookShare on TwitterShare on PinterestShare on Reddit
Saman SiddiquiAugust 12, 2020
the authorSaman Siddiqui
Saman Siddiqui, A freelance journalist with a Master’s Degree in Mass Communication and MS in Peace and Conflict Studies. Associated with the media industry since 2006. Experience in various capacities including Program Host, Researcher, News Producer, Documentary Making, Voice Over, Content Writing Copy Editing, and Blogging, and currently associated with OyeYeah since 2018, working as an Editor.
All posts bySaman Siddiqui