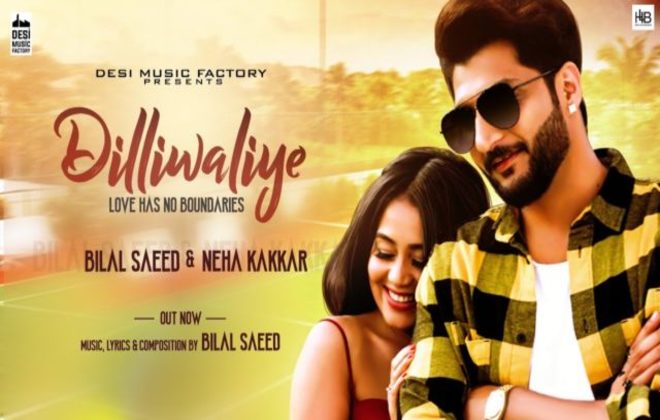 For Punjabi music fans, this Indo-Pak collaboration is another treat by these two singers. Back in 2017 Neha and Bilal sang the Punjabi track “Suroor” together, and also a groovy number of Bollywood film ‘Bazaar’.

This newly released romantic track ‘DilliWaliya’, sends the message of peace and love, proving love has no boundaries. As the boy hailing from Sialkot and girl from Delhi falls in love while studying in U.K.

Desi music lovers will surely like DilliWaliya’s sterling beats telling the story of the much-in-love Bilal and Neha, belonging to two rival nations.

Music, lyrics and composition for this song is done by Bilal Saeed himself. It is released by Desi Music Factory.

Both the singers have previously collaborated with each other for the songs ‘La La La (Bazaar)’ and above mentioned ‘Suroor’, proving love for music has no boundaries.

Indian singing sensation Neha Kakkar rose to fame with the Indian Idol 2, and now has been singing for Bollywood proving herself singing in various genres.

tweet
Share on FacebookShare on TwitterShare on PinterestShare on Reddit
Saman SiddiquiDecember 14, 2018
the authorSaman Siddiqui
Saman Siddiqui, A freelance journalist with a Master’s Degree in Mass Communication and MS in Peace and Conflict Studies. Associated with the media industry since 2006. Experience in various capacities including Program Host, Researcher, News Producer, Documentary Making, Voice Over, Content Writing Copy Editing, and Blogging, and currently associated with OyeYeah since 2018, working as an Editor.
All posts bySaman Siddiqui