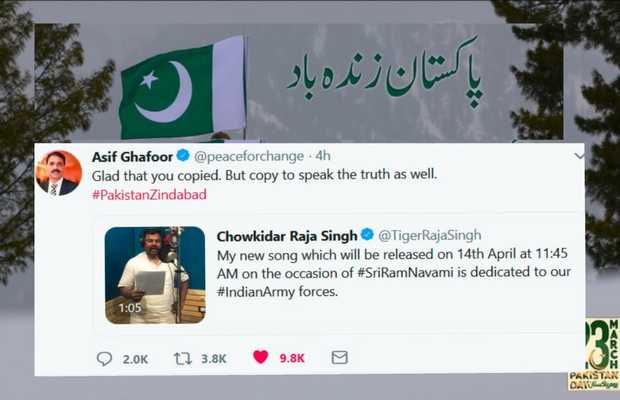 When it comes to Bollywood, stealing film plots, songs, music composition and dance moves is not a new thing. But this time an Indian politician attempts epic plagiarism by stealing ISPR’s latest song ‘Pakistan Zindabad’, which was released last month.

While keeping the tradition alive to make special songs on the national events, the Inter-Services Public Relations (ISPR) released the new song as part of 2019’s Pakistan Day celebrations.

To point out the theft, it was none other than DGISPR, Spokesperson Pakistan Armed Forces, Maj Gen Asif Ghafoor.

By taking to social media, Maj Gen Asif Ghafoor, tweeted from his personal account saying, “Glad that you copied. But copy to speak the truth as well. #PakistanZindabad”.

An Indian named Chowkidar Raja Singh, shared about his latest song on Twitter, saying “My new song which will be released on 14th April at 11:45 AM on the occasion of #SriRamNavami is dedicated to our #IndianArmy forces.

By going through Chowkidar Raja Singh’s twitter profile it is not clear that wheater he is a professional singer or just a politician who is just trying hard for making election campaign look musically great with a copied song from the arch-rival neighbour’s military wing’s song.

As soon as the song theft was identified, Pakistanis were quick to reply over Maj Gen Asif Ghafoor’s comments. Reading out those replies could make your day.

Wisdom and sense is required to copy something but here against all odds this man is copying ISPR song with pride,,shame on him. Congratulations to ISPR for rocking the world specially India.

Hahaha! Sir you picked it well, they mostly rely on Charba, they claim they have huge number of musicians & lyrics writers, yet they produced this, A Copy 😁😂😂

For anyone who wants to listen to the real song pic.twitter.com/ZZf8LjG4wV

tweet
Share on FacebookShare on TwitterShare on PinterestShare on Reddit
Saman SiddiquiApril 14, 2019
the authorSaman Siddiqui
Saman Siddiqui, A freelance journalist with a Master’s Degree in Mass Communication and MS in Peace and Conflict Studies. Associated with the media industry since 2006. Experience in various capacities including Program Host, Researcher, News Producer, Documentary Making, Voice Over, Content Writing Copy Editing, and Blogging, and currently associated with OyeYeah since 2018, working as an Editor.
All posts bySaman Siddiqui