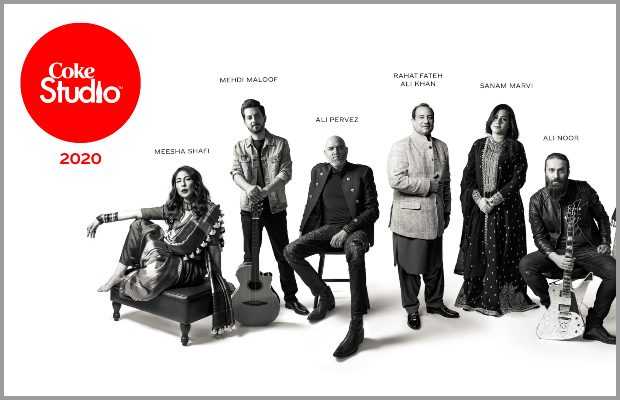 Coca-Cola Company Pakistan has revealed the official artist lineup for the thirteenth season of Coke Studio Pakistan, confirming the arrival of Coke Studio 2020.

Despite the nation-wide lockdown and restrictions due to COVID-19 this past year, the Coca-Cola Company has been committed to its annual promise of sharing free music and furthering the Coke Studio Pakistan legacy by launching a limited yet exclusive season featuring 12 songs, accompanied by a revised video format.

This season’s Coke Studio, produced by Rohail Hyatt, was administered under careful management and maintenance of COVID-19 SOPs which resulted in both singers and musicians being recorded separately. Yet despite these challenges, Coke Studio was committed to releasing a season as an opportunity to keep hope alive amidst difficult times, especially keeping in mind the artist and musician community that has suffered the most due to COVID-19.

The season includes 12 new songs featuring 13 artists, out of which four emerging artists will make their debut on this platform. This includes an assortment of singers ranging from industry veterans like Rahat Fateh Ali Khan, Meesha Shafi, Fariha Pervez, Umair Jaswal, Ali Noor, Bohemia, and Sanam Marvi alongside new-comers such as Mehdi Maloof, Aizaz Sohail, Sehar Gul Khan and Wajiha Naqvi as well as experienced artists such as Zara Madani and Ali Pervez Mehdi. Not only will this be a season featuring purely original songs, but the focus for this season has also been on its content and social messaging including an all-female anthem on women’s empowerment. Interestingly, this will be the first time ever in Coke Studio history that all the female artists of the season will be singing together, although each artist was recorded separately. Moreover, given the new format and advantages of technology, this season has also collaborated with international musicians from across the world including Turkey, Nepal, Lebanon, and Serbia.

“Working on this season has been a valuable learning experience. It has left me with a realization that in order for anything to survive, it must have the ability to change and adapt to the circumstances that surround it.  Even in trying times, we must not give up but instead re-invent ourselves and keep moving ahead. Despite the limitations of this pandemic, everyone on the team, especially the artists, willingly left their comfort zones only to help keep alive the tradition of sharing music. It is with this same spirit that we bring Coke Studio to you this year; a humble effort to share something familiar, yet new.” said producer Rohail Hyatt.

Celebrating the success of the Coke Studio 2020 launch, Fahad Ashraf, GM Coca-Cola Pakistan & Afghanistan, commented, “CS2020 is going to be unprecedented, just like the current situation. We’ve tried to retain the core values of the platform while ensuring the health and safety of everyone involved. It’s intended to be fresh, experimental and diverse, and we sincerely hope it will help to lift the spirits of the nation”.