An evocative 2-minute-long song has made the BTS fans go gaga over social media. 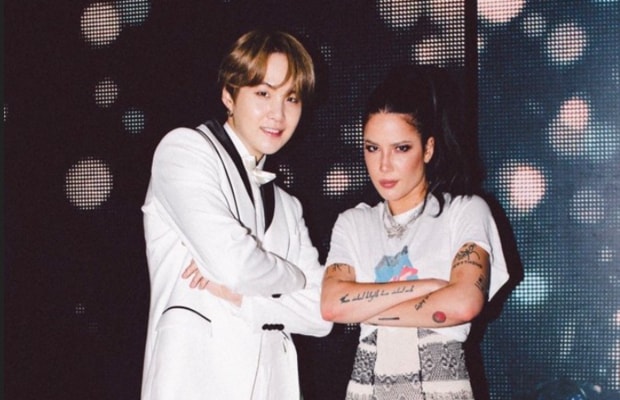 American singer and songwriter Halsey has released a new single ‘SUGA’s Interlude’ featuring BTS rapper SUGA. And fans can’t have enough of it!

This comes after Halsey made the announcement a week earlier that she will be releasing two songs off her forthcoming third studio album.

The song was penned by Suga, Halsey, and Lido that captivated BTS fans ARMY, who were quick to share the translation of Suga’s part of the song on social media:

Though the dawn before sunrise is darkest, don’t forget the stars you longed for only rise in the darkness”

After the song release, Halsey once again took to social media celebrating the success of the new song by sharing a photo featuring her along Suga

We put a song out yesterday and today we get to celebrate in person!!!! ✨💕🌸🦋Best feeling in the world! pic.twitter.com/eHdcPUutId

After the song release, BTS fans are going gaga over social media.

Halsey picked Yoongi for the purpose of letting him shine, she believes in his voice and talent, and wanted to help showcase that 😭. #SUGAsInterlude @BTS_twt @halsey pic.twitter.com/icDT1p30FY

tweet
Share on FacebookShare on TwitterShare on PinterestShare on Reddit
Saman SiddiquiDecember 7, 2019
the authorSaman Siddiqui
Saman Siddiqui, A freelance journalist with a Master’s Degree in Mass Communication and MS in Peace and Conflict Studies. Associated with the media industry since 2006. Experience in various capacities including Program Host, Researcher, News Producer, Documentary Making, Voice Over, Content Writing Copy Editing, and Blogging, and currently associated with OyeYeah since 2018, working as an Editor.
All posts bySaman Siddiqui