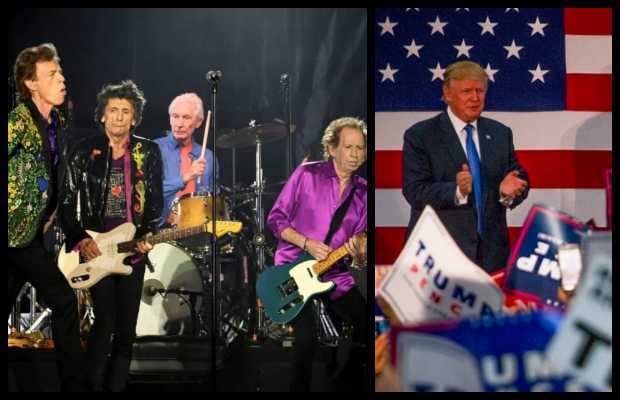 Owing to the copyright and licensing restrictions, President Donald Trump may never be able to use Rolling Stones song ‘You Can’t Always Get What You Want’ at his future election rallies. The POTUS who has so far not regarded the licenses or the song owner’s objections on the use for his campaigns may have to back down now as Rolling Stones intends to slam the president with a lawsuit otherwise.

“Despite cease and desist directives to Donald Trump in the past, the Rolling Stones are taking further steps to exclude him using their songs at any of his future political campaignings,” said a statement released by the band who has now taken BMI onboard to ensure licensing is taken into account.

However, a glitch that BMI and Rolling Stones need to contest is that Trump may continue using the band’s songs in the pretext of the rally venues holding a blanket license for all performances taking place. BMI says it has a clause that will prevent Trump from misusing venue licenses.

“A venue license was never intended to cover political campaigns. So if a campaign attempts to rely on a venue license to cover its music use, there’s risk involved,” says a spokesperson for BMI.

“BMI’s Political Entities License was implemented about ten years ago to cover political campaigns,” the spokesperson added while informing that Trump does hold the political entities’ license but even that can be challenged.

“The Trump campaign has a Political Entities License. There is a provision, however, that allows BMI to exclude musical works from the license if a songwriter or publisher objects to its use by a campaign,” the BMI rep says.

“BMI has received such an objection and sent a letter notifying the Trump campaign that the Rolling Stones’ works have been removed from the campaign license,” he adds while confirming use of a track by the campaign will now be a breach of contract which can result in a lawsuit.