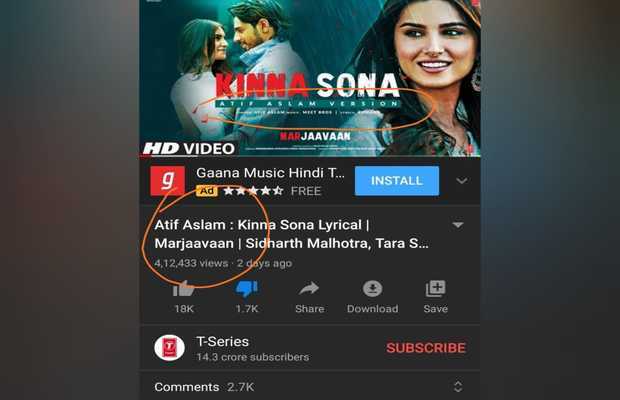 T-Series has made Atif Aslam’s version of the song ‘Kinna Sona’, from the film ‘Marjaavaan’ private two days after releasing it.

The reason was the massive social media backlash towards the music platform had faced for featuring a song by a Pakistani artist.

The anti-Pakistani sentiments in India are not new, and after releasing a song by Pakistani singer the Indian label drew public ire.

It was earlier in April when the FWICE had issued a notice, stating, “We have to strictly inform all the members of our affiliates to kindly note that the Non-Cooperation Circular is valid and subsisting and anyone found cooperating or working in any manner with any Pakistani artistes, singers, and technicians, in any mode or media of Entertainment will be subject to strict disciplinary action initiated by FWICE which everyone may please note.”

However, for Atif Aslam fans, T-Series decision to make the song private was not acceptable. And they demanded to restore all Atif Aslam songs.

Not only do we want @TSeries to make the video of "Kinna Sona" by Atif Aslam public but we also want the label to release all his replaced songs and record new songs with him too. Music has no boundaries.#WeWantAtifAslamSongBack#WeWantAtifAslamSongsBack