19 dead, scores injured as a train collides with passenger coaster near Sheikhupura

Shah Hussain Express was coming to Lahore from Karachi. 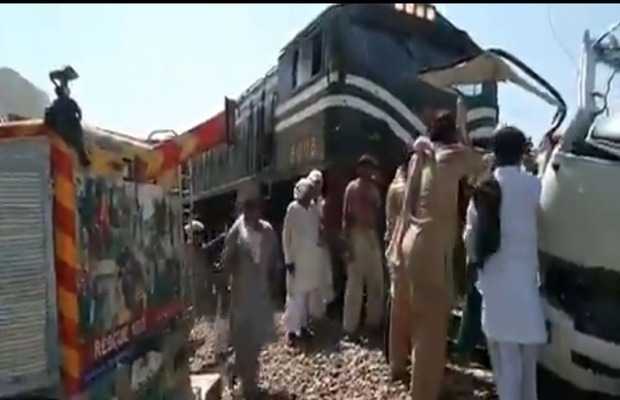 At least 19 Sikh pilgrims killed in an accident when a passenger coaster collided with Karachi to Lahore bound train Shah Hussain Express, near Sheikhupura.

As being reported, a coaster bus collided with the train at the gate on Farooqabad Jatri Road. The accident took place at the crossing without a gate.

The Sikh pilgrims on the bus were going to Sacha Sauda Gurdwara for pilgrimage.

According to the spokesman, a bus full of passengers was hit by a fast-moving train, which dragged the wagon away, causing more casualties.

DPO Sheikhupura confirmed that 19 people were killed in the accident and said that Sikh pilgrims were riding in the bus and the vehicle collided with Shah Hussain Express at the railway crossing on Yatri Road.

Sixteen passengers were killed and more than 10 were seriously injured in the crash, according to the rescue team.

Team of Rescue 1122 Sheikhupura reached the spot and is busy in providing medical aid to the injured.

As being reported, two children and seven men were rushed to Sheikhupura Hospital in critical condition.

tweet
Share on FacebookShare on TwitterShare on PinterestShare on Reddit
Saman SiddiquiJuly 3, 2020
the authorSaman Siddiqui
Saman Siddiqui, A freelance journalist with a Master’s Degree in Mass Communication and MS in Peace and Conflict Studies. Associated with the media industry since 2006. Experience in various capacities including Program Host, Researcher, News Producer, Documentary Making, Voice Over, Content Writing Copy Editing, and Blogging, and currently associated with OyeYeah since 2018, working as an Editor.
All posts bySaman Siddiqui