The stampede erupted in Kerman, the hometown of slain Soleimani where the procession was under way. 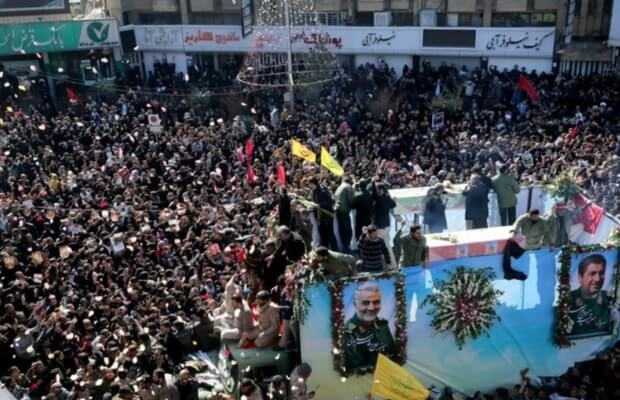 35 people were killed and 48 others injured in a stampede that erupted at a funeral procession for Gen Qasem Soleimani reports Iranian state television.

According to the media report, the stampede erupted in Kerman, the hometown of slain Soleimani where the procession was under way.

The exact time of his burial is not yet clear, as the authorities later delayed Soleimani’s burial, citing concerns about the massive crowd that had gathered, the semi-official ISNA news agency said. as officials postponed the burial after crowding getting so bad that dozens of people died in a stampede.

Initial videos posted online showed people lying lifeless on a road, others shouting and trying to give help them.

“Unfortunately as a result of the stampede, some of our compatriots have been injured and some have been killed during the funeral processions”, said Pirhossein Koulivand, the head of Iran’s emergency medical services, adding at least 190 people had been injured.

The last remains of Gen Soleimani were flown via passenger jet into Iran earlier this week. The coffin was paraded through the streets of multiple major Iranian cities including Tehran, Qom, Mashhad, and Ahvaz.

More than a million people flooded the streets across the four cities, to pay their last respects to the top general.

tweet
Share on FacebookShare on TwitterShare on PinterestShare on Reddit
Saman SiddiquiJanuary 7, 2020
the authorSaman Siddiqui
Saman Siddiqui, A freelance journalist with a Master’s Degree in Mass Communication and MS in Peace and Conflict Studies. Associated with the media industry since 2006. Experience in various capacities including Program Host, Researcher, News Producer, Documentary Making, Voice Over, Content Writing Copy Editing, and Blogging, and currently associated with OyeYeah since 2018, working as an Editor.
All posts bySaman Siddiqui