Chaos continues at Kabul airport, 7 Afghans killed while trying to flee the country

the danger still posed to those trying to flee the Taliban’s takeover of the country. 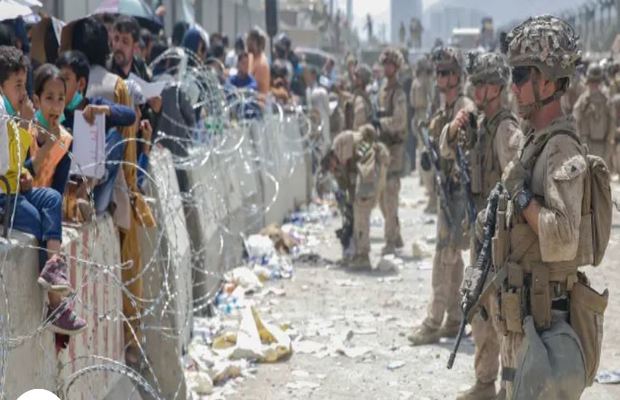 On Sunday, the British military acknowledged the deaths of seven civilians in the crowds at the Kabul airport. While the danger still posed to those trying to flee the Taliban’s takeover of the country.

There have been reports and eyewitness accounts of stampedes and crushing injuries in the crowds, especially as Taliban fighters fire into the air to drive away those desperate to get on any flight out of the country.

It wasn’t immediately clear whether those killed had been physically crushed or suffocated.

As being reported, the soldiers covered several corpses in white clothes to hide them from view. Other troops stood atop concrete barriers or shipping containers, trying to calm the crowd. While the gunshots at the airport presmisis occasionally rang out.

“Our sincere thoughts are with the families of the seven Afghan civilians who have sadly died in crowds in Kabul,” a ministry spokesman said in a statement.

“Conditions on the ground remain extremely challenging but we are doing everything we can to manage the situation as safely and securely as possible,” the statement said.

British Defence Secretary Ben Wallace told the UK newspaper Mail on Sunday that “no nation will be able to get everyone out” before the US deadline of August 31.

“Perhaps the Americans will be permitted to stay longer and they will have our complete support if they do,” he said.

On Saturday, troops in full combat gear tried to control the crowds trying to get inside the airport.

The troops carried away some civilians who were sweating and pale.

the soldiers sprayed water from a hose on those gathered or gave them bottled water to pour over their heads as temperatures in Kabul soars to 34°C.

On the other hand, Kim Sengupta, The Independent’s Defence and Diplomatic Editor, tweeted on Saturday that he had witnessed four women die “from heat and crush”.

“The four deaths at Kabul airport were outside the British camp, soldiers tried all they could to save the victims. Bodies were later collected by relations,” he added.

In Kabul : a grim and very sad morning at the airport, saw four people, all women, die from heat and crush, absolutely heartbreaking.