7 dead, of Pakistani origin including 4 children, after house fire in Alberta 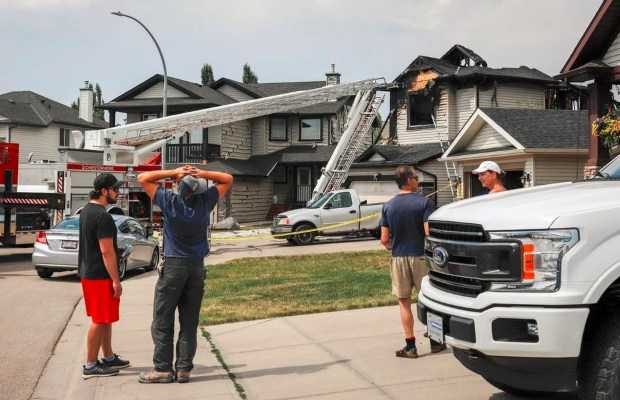 7 of Pakistani origin including 4 children died in a house fire in Canada’s Chestermere, Alberta region.

As being reported the two relative families have gathered on Canada Day when the house caught fire on early Friday morning.

Pakistan’s high commissioner to Canada and its consulate in Vancouver are reported to be in constant contact with the family.

The cause of the fire has not been determined but a preliminary investigation does not indicate criminal activity, authorities said.

Keibel said the deceased individuals found in the house were:

Calgary Imam Syed Soharwardy with the Islamic Supreme Council of Canada in a statement said that the families were members of his congregation at Green Dome Mosque in northeast Calgary and also attended the Al-Madinah Chestermere Islamic Centre in Chestermere.

“It’s a very devastating situation, the whole community is in shock,” Soharwardy said.

Calgary Imam Syed Soharwardy has identified one of the deceased family members as Asad Kamal, who he knew personally, and said his brother, Amjad Kamal, managed to escape the fire.

Foreign Minister Shah Mahmood Qureshi in a statement shared with the Associated Press of Pakistan said: “I am deeply grieved over the loss of Pakistani nationals in a fire incident. We are in contact with the Canadian authorities for [an] investigation into the incident.”

Foreign Minister also prayed for the departed souls and for strength to the bereaved family to bear the loss with fortitude, said the statement, adding that he also ordered extension of wide-ranging support to the affected family.

On the other hand, a statement from the Foreign Office (FO) also expressed its condolences and said it was “deeply saddened by the tragic death, due to house fire, of seven Canadian-Pakistanis, including four children, in Alberta, Canada.”

“Our thoughts and prayers are with the families of the victims of this tragic incident. We also pray for quick and full recovery of the injured.”

“As per the relevant Canadian authorities, the cause of the fire is still unknown, however, preliminary investigations indicate that it’s not criminal in nature,” said the FO statement.

The FO  in the statement added that the Pakistan Consulate General in Vancouver was in contact with the relevant Canadian authorities to determine the facts of the incident and offer “all possible assistance” to the bereaved family.