A Giraffe spotted in Karachi’s DHA has left netizens shocked 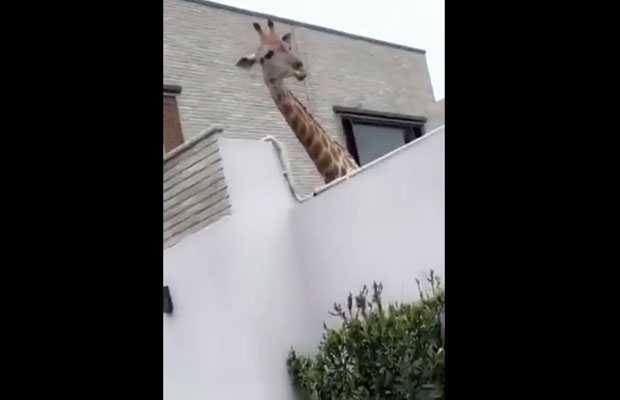 The residents of Karachi have left amazed after a video emerging on internet spotted a giraffe in a house in Defence Housing Authority area.

The video has been doing rounds on social media which was also noticed by the Sindh Wildlife Department Conservator Javed Mahar, who took to Twitter on Wednesday said that a family in DHA area has kept a pet giraffe but they does not have a valid license to do so.

The news got attention after a person shared a short video clip of a giraffe amid the heavy monsoon rains.

We live in a civil society that is governed by laws not by men. Civil society gives a civic sense that is all about having consideration for a fellow human being while living in a civilized society. On the complaints of our respected citizens @sindhwildlife team visited this 1/3 https://t.co/iQlhKzx4bC

Conservator of the Sindh Wildlife Department told the DHA administration did not take any action against the matter, adding that the owner of the pet giraffe had been warned six to seven months ago to not keep it at a residential area and shift it to a farmhouse.

He further added that DHA has policies and regulations in place that govern its neighbourhoods.

Mahar said that a permission to operate a mini zoo does not entitle one to house an elephant or giraffe.

permit doesn't entitle to keep an elephant or giraffe
This was not clear in old format of mini zoo permit that is being added under new rules made by wildlife department Government of Sindh.
We will send a fresh request to the owner to shift this from residential area🙏
@norbalm

“This was not clear in old format of mini zoo permit that is being added under new rules made by wildlife department,” he wrote.

He said the wildlife department will send a fresh notice to the owner to shift the animal from the residential capacity.